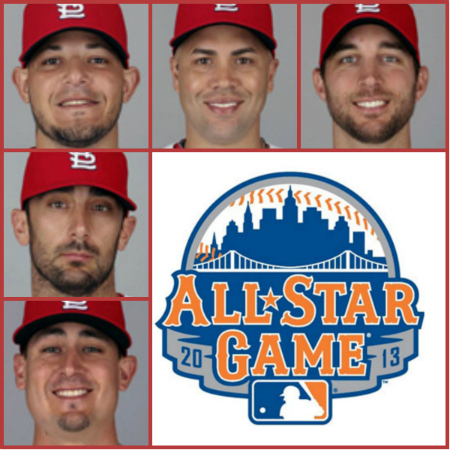 And, though he didn’t quite catch that loudmouth from Cincinnati in the fan vote, Matt Carpenter was chosen by his peers — as was Adam Wainwright. And All-Star Game and Giants manager Bruce Bochy selected Allen Craig.

All of which adds up to five All-Stars for the Cards, the most of any team in the National League and the third time in the last four years they’ve had at least five All-Stars, according to Jenifer Langosch at Cardinals.com.

This is Yadi’s fifth consecutive time being named to the All-Star team, and his third time as a starter. For Beltran, it’s All-Star Game number eight and it’s the second time as an All-Star for Wainwright.

Carpenter and Craig are first-time All-Stars. As Langosch wrote about Matt:

For Carpenter the honor comes just months after he competed for a starting job at second base, a position that he learned through a crash course of work during the offseason. After earning a starting role with a stellar spring, Carpenter has thrived with the everyday opportunities.

Pretty impressive, to say the least

And, as with the case for all five of the Cards All-Stars, very well deserved. It’s too bad there wasn’t room for Edward Mujica as well.

The All-Star Game is July 16 at Citi Field in New York.