You make the call — just click below to vote. We couldn’t decide among ourselves who is the most valuable St. Louis Cardinal for the first half.

Because while it seemed obvious at first  — Yadier Molina, of course — we thought of Matt Carpenter. And then thought more: where would the Cards be without Edward Mujica? Plus what about Adam Wainwright?

See … not so easy to decide.

That’s why we’ll put it up for a vote from you. Here is our rationale for each of those four, followed by the poll at the very bottom. And good luck with your decision.

To start: my thoughts on the starter. 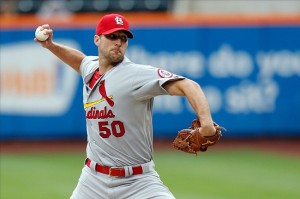 If we’re comparing the 2013 Cardinals pitchers to cars, we know that Joe Kelly is a Ferrari who sometimes just sits in the garage. Shelby Miller would be a Mustang, because of course. And, before this goes on too far, Adam Wainwright would be an Audi A8. I mean, look at the words Audi uses to describe the A8: Prestige. Performance. Perfection. Truly a class apart.

Perfection might be stretching it a little bit — no perfect games for Wainwright yet, but that could certainly happen someday in the future. Especially given what we’ve seen so far in 2013.

Two masterpiece shutouts — a four-hitter with 12 strikeouts against the Brewers on April 13 and a no-hitter-into-the-eighth-and-two-hitter-overall with seven K’s against the Rockies on May 11. Only Clayton Kershaw has two shutouts in the National League this year, and no one has four complete games like Waino does.

Waino’s also second in WAR for pitchers at 4.7, meaning the Cardinals have won nearly 5 more games so far this season than they would have with a replacement-level pitcher in there. Clayton Kershaw has the leading pitcher WAR at 5.1.

And speaking of replacements, how about the leadership that Wainwright has provided for a starting rotation that has seen its ups and downs and ins and outs due to injuries? Those 20 starts he’s made — most in the NL. He’s also pitched the most innings of anyone in the National League, 146.2.

That Audi A8 description doesn’t talk about value or reliability, yet it does mention its performance being truly a class apart. Which pretty much sums up Adam Wainwright’s first half for the Cardinals.

It’s hard to imagine this first half without Magical Edward Mujica in the closer role for two reasons. 1) He’s taken to it like a fish to water, so it’s hard to remember those painful days when he wasn’t the closer, but 2) if he hadn’t stepped into that spot when the Cardinals needed a 9th inning guy in a bad way … *shudder*

After falling into the closer role on April 18, Mujica pulled off 21 straight saves. He finished the final series before the All-Star break with his 26th save and his 2nd blown save (that then turned into his 2nd win).

He has a 2.20 ERA — that’s 10 earned runs in 41.0 innings pitched. He’s given up five home runs, but struck out 34 and walked only two on the year, making his WHIP an All-Star-Worthy 0.73. Opponents are stymied by his splitter and two-seam fastball, hitting just .188 against him.

He may have started out as the closer by default, but he staked his claim and made himself one of the most valuable pieces puzzle for the Cardinals in the first half.

What is an MVP? That in of itself is a complicated question. Everyone has their own reasoning they use to determine their MVP.  In this case, I too have my own reasons.

I was first asked this question a few days ago, and surprisingly I didn’t need much time to think about my answer. For me, the answer was Matt Carpenter. Yes, I easily could have chosen Yadier Molina or Adam Wainwright and, after Yadi’s three run homer in the ninth Sunday night, it would have been easy to switch sides. But to me, both are playing at the level that Cardinal fans have come to expect.

I think the one thing we can all agree on is that it is definitely a good problem to have so many qualified candidates, but at this point the Cardinals MVP is All-Star Matt Carpenter.

You know, when he first made his debut in June 2004, we figured, hey, with that butt and those thighs, you know the kid isn’t ever going to be a track star; I don’t know if you could have considered him in scoring position if he were standing on third base, he was so slow. Let’s be honest, the less kind of us said he had a bad body. But you know, that’s okay. We thought maybe a little bit of his older brothers rubbed off on him. Maybe the talk around the dinner table with Bengie and Jose in the winter as they munched on mofongos with a Medalla on the side on how to handle pitchers and call a game means Yadi wouldn’t be clueless at the big league level as so many rookie catchers are.

Besides, the Cardinals had a Gold Glover already in Mike Matheny to mentor the kid along.

And the girls thought he was cute — you’d go to Busch Stadium back then or watch the games off Fox Sports Midwest, and they’d all be wearing jerseys with Molina across the back. You know the ladies are a keen judge of talent.

We all knew he couldn’t hit that well, probably never would. Yeah, okay, he hit .302 for Memphis in 129 at-bats before the Cardinals called him up. Finished up with a .267 average with the ’04 NL Champs that year. But by 2006, when he took over full time after Matheny went off to San Francisco, he was down to .216. Can you win a World Series with your every day catcher hitting .216? Guess so, but only if Aaron Miles hits .263 and So Taguchi hits .266 to make up for it.

But something happened to cute li’l Yadi.  The teddy bear become a monster.

Look, when I was a teenager, Ozzie Smith was winning Gold Gloves every year, so often they should have named the award after him. It was Ozzie at short in the National League, and everybody else was fighting for second place. Like Yadi, Ozzie couldn’t hit — Game 5 walk-off homers aside.

In 1987, Ozzie hit .303 and should have, if there were any justice in this cruel, brutish world, won the Most Valuable Player award unanimously. He didn’t, I’m still not over it. From then on, he may not have been an offensive force to be reckoned with, but he wasn’t like facing a pitcher hitting eighth or some such. Dude finished with 2,460 hits, for crying out loud.

So something happened with Yadi at the plate to begin approaching what he’s done defensively behind it. Fourteen homers in 2011, 22 homers last year, with a career high .315 average. And, a fourth-place finish in the MVP balloting. Whoa.

Let’s look at WAR, everybody’s trendy catch-all metric to measure the value of a player. Defensively, Yadi’s been great — in that 2006 season, his defense alone was worth 2.0 WAR (Baseball Reference) while at the plate, worse than Ryan Franklin on the mound with runners on in the ninth: -1.5. Makes you wish the National League could have had a DH for catchers that year.

But last year, Yadi was with 2.6 WAR behind the plate. Want to know his offensive worth?  5.1 WAR. At the plate, Yadier Molina was in the company of David Wright, Ryan Braun and Adrian Beltre. Really. Our great glove, no-hit Yadi suddenly was an offensive force. Scary.

And not just because of a neck tattoo. Apparently, chicks dig the neck tattoos, because they’re still wearing Yadi jerseys. Ladies remain a keen judge of talent.

Here’s the kind-of scary part. All of this might never have happened with the Birds on the Bat. The Cardinals let Albert Pujols go, and that freed up enough money to sign Waino and Yadi, the latter to a five-year extension before the 2012 season.

And now there’s 2013, and what Yadier Molina has done to deserve another All-Star Game start and receive the most votes in the NL. You don’t need a rundown of his numbers. But I will say that if I awoke one day to see in the papers in mid-July that Yadi was hitting .341, I’d have to run outside to see if the skies above suddenly had turned plaid. And a good plaid pattern, too, like Burberry or something. You’d figure God has taste, even if He would turn the skies plaid with the news Yadi is leading the league in batting average. Beats frogs, plagues or any of that other end of the world stuff. Plaid.

“Yadi is leading the league in batting average.” I never thought in 2006 I’d write that. Nah, never.

(Poll is closed now — thanks for your votes!)