What’s that saying — it’s all fun and games until somebody takes a line drive off the elbow? 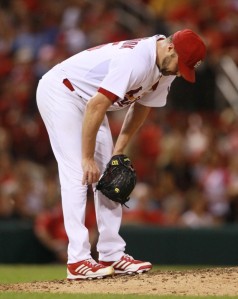 Yeah. That was Star Wars Night at Busch Stadium. Two pitches, a Carl Crawford liner, Shelby Miller out of the game.

Then there were the nine runs allowed by Jake Westbrook (including six during his first inning of relief), four allowed by Keith Butler and four RBI by Skip Schumaker as the Los Angeles Dodgers beat the St. Louis Cardinals 13-4.

But, hey, Rob Johnson pitched! Yes, the Cards backup catcher faced Dodgers relief pitcher Paco Rodriguez — and got a strikeout. (Not even our blog namesake ever got a K in his five career innings pitched.) It was the first time a Cardinal position player took the mound since Mr. Schumaker himself, back on Aug. 23, 2011, coincidentally against the Dodgers (and our namesake had a role in that game as well).

Actually, Michael Blazek was decent in relief last night also — coming in after Shelby’s two pitches to throw a scoreless first even after loading the bases. And Randy Choate did a good job, going 1 1/3 scoreless innings.

Plus, there were actually positives from the Cardinals offense and they attempted a comeback of sorts in the fifth as they scored three — that made it 7-4.

Jon Jay had three hits in the game, Carlos Beltran and Matt Carpenter each had two hits and an RBI (and seeing that from Carpenter is definitely good), and Matt Holliday and Daniel Descalso each had RBI singles.

The biggest story of the night, however, was Shelby Miller. And it looks like things are hopefully OK there, as Jenifer Langosch reports:

Miller was diagnosed with a right elbow bruise. X-rays came back negative, and Miller hopes to avoid a move to the disabled list.

“It’s just a relief that nothing serious happened,” said Miller, who was left with seam marks on his elbow. “It’s just unfortunate that stuff happens because I want to go out there and help the team win every single day I get the chance to pitch. To only throw two pitches stinks.”

And with Westbrook moving up from his previously scheduled start for tonight, Carlos Martinez will return to the big leagues and take over — which could be promising. As Langosch writes:

St. Louis will need a win on Thursday to salvage a series split, but will also have to summon a starter to pitch that game. That will be highly-touted pitching prospect Carlos Martinez, who will make his first Major League start. Martinez is ranked as the Cards’ No. 3 prospect, according to MLB.com.

“There is going to be some opportunity that some people weren’t expecting,” Matheny said. “You never know how something like that works out. It could be a blessing in disguise, give one guy more rest later on. You never know.”

So it will be good to see Martinez in a starting role instead of the relief appearances he’s made for the Cardinals so far. Here’s hoping for a successful starting debut — and the series split.

No matter what happens, though, it will be a good night: no more Star Wars talk.

Christine Coleman is the creator, lead writer and editor of Aaron Miles’ Fastball. Follow her on Twitter, @CColeman802, or email aaronmilesfastball@gmail.com. Also follow @AMilesFastball for the latest updates.

2 thoughts on “Hopefully, Cardinals, That Will Be The Only Star Wars Night”