It’s a positive that Lance Lynn didn’t have his infamous one bad inning last night, right?

And, to hear him tell it, he only threw three bad pitches all night. (Yep, really.) 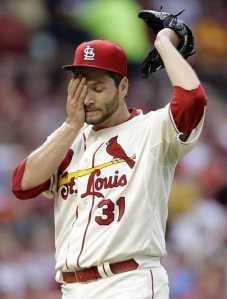 Yeah, Lance, we know the feeling …

Not that any of this provides consolation, as the Cardinals lost 6-2 to the Reds and have now lost six of their last eight games — including three of four in Cincinnati. They are now 1 1/2 games behind the first-place Pirates and 1 1/2 games ahead of the third-place Reds.

The loss meant there wasn’t any momentum from Wednesday night’s thrilling 16-inning win — just like there wasn’t any momentum after those exciting 14-inning and 12-inning wins over the Pirates in mid-August. The Cardinals have lost the next game all three times. Plus, as we all remember from Earl Weaver, momentum is the next day’s starting pitcher. So, when that man’s name is Lance Lynn, Cardinals fans are pretty much bracing themselves for how bad things could go this time.

Not that everyone wants to dislike him and dread his appearances — I certainly don’t.

This is what he said after the game, from Jenifer Langosch at Cardinals.com:

“It’s definitely not fun, especially with the stuff I’ve had lately,” said Lynn, who’s allowed at least four earned runs in each of his last five starts. “I think it’s some of the best I’ve had all year. It’s frustrating … If you look at the game overall, I made three bad pitches that they hit for three home runs,” he said. “That usually doesn’t happen. You take away those three pitches, and it’s a totally different ballgame.”

Indeed. Without those three pitches hit for homers, it would have been a 3-2 Reds win.

And, Wolf Pup, I’m glad you think it’s some of the best stuff you’ve had — Jay Bruce, Shin-Soo Choo, Todd Frazier, Brandon Phillips, Neil Walker, Russell Martin, Marlon Byrd, Jose Tabata and even A.J. Burnett would certainly agree you have, given they drove in the 11 runs you’ve now given up in your past two games.

But, hey, Mike Matheny is perplexed too, given how good your stuff has been:

“It’s more frustrating for him,” Matheny said. “You watch his stuff and how it moves and you scratch your head, because you know how good he can be.”

Yes, Mike, he can be good. Right now, though, he’s hittable. Every game. And it’s beyond frustrating for the fans too. Can we remind you there are only 22 games left?

These next three are pretty big too, since they are the final games of the regular season against the Pirates. A 1 1/2 game lead is easily eliminated with good outcomes, and the Cards did take two of three — those extra-inning games mentioned above — when the Pirates were at Busch Stadium last month.

Yet the Pirates have their own motivation during this series, beyond just wanting to build their division lead. They’ve won 81 games — the first time since 1992 that’s happened, so they won’t have a losing season. But they need to win 82 to assure themselves a winning season. And they lost Wednesday night in Milwaukee with Francisco Liriano pitching. (There’s a genuine plus for the Cardinals — they don’t have to face him.)

Interesting times ahead … and it starts tonight at 7:15 p.m.