Whatever it takes to win, right? And with the cold offense continuing, great defense and taking advantage of any possible opportunity are what it does take — and that’s exactly how the Cardinals walked-off a winner over the Mariners 2-1 in 10 innings.

Oh, and with the win and the Pirates loss, the Cards have sole possession of first place in the NL Central again — thank you, Anthony Rizzo and the rest of the Cubs!

Here’s how this wild winner came about.

First, there was Adam Wainwright doing what he does best — which you can see the full highlights of here. Eight innings with only one run on a home run by Mike Zunino, six total hits, six strikeouts (including number 200 of the season on — surprise — a curveball) and two walks.

About that great defense: yeah, pretty spectacular. In the fifth inning, Matt Carpenter’s diving stop of an Abraham Almonte single and heads-up throw to David Freese at third kept the Mariners from scoring — see it again here. Then, in the seventh, Matty Carp made another incredible dive and threw from his knees to just get Zunino at first. 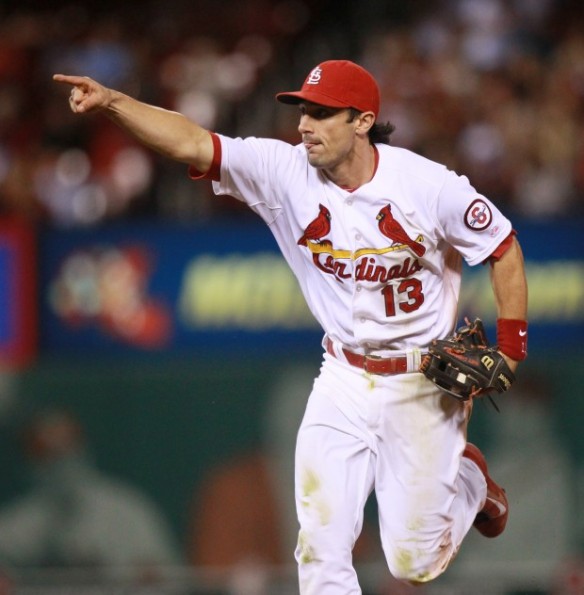 Yep, Matt, we all love how Yadi throws too.

Then there was Yadi (whose business card might just read Yadier Molina – BAMF). In the ninth inning, with the score tied 1-1, Endy Chavez — perhaps still overly pleased with himself for his catch in game seven of the 2006 NLCS, thought he could steal second as Micahel Saunders struck out. However, just like back in 2006, Yadi had the last laugh — because of course Chavez was out. The very next batter, Dustin Ackley, singled and then proved he was paying no attention to what Yadi did to Chavez. He tried to steal second also. Yep, of course Yadi prevailed.

Those plays, of course, were much needed since Hisashi Iwakuma was one big reason why the Cardinals offense remained stalled. He only allowed three hits (a Matt Carpenter third inning double, a David Freese single in the fifth and a Carlos Beltran double in the seventh) with two walks and one strikeout in seven innings.

In the eighth, the Cardinals did finally get on the board — through even more heads-up play from none other than Pete Kozma. He pinch-ran for Brock Peterson, who reached following an error by Nick Franklin and took second base. Kozma stole third on a walk to Carpenter, which meant he was in the perfect position to advance when the Mariners couldn’t turn a double play on Jon Jay’s grounder — tie game!

Then there was the bottom of the 10th.

With two outs, Kozma singled and the Mariners brought in Oliver Perez (for yet one more flashback to game seven of the ’06 NLCS). Perez must have been having flashbacks also, as he walked both Carpenter and Jay to load the bases. With Matt Holliday at the plate, Perez’s first pitch was one Zunino couldn’t hang onto — and Kozma scored from third!

Seeing, of course, is better — so here’s the play, first with the Mariners broadcast (“Goodness, gracious” indeed), and then with the more enthusiastic perspective from Danny Mac and Al.

Yes, as Al noted, it was a passed ball — so not another walk-off wild pitch like we saw during the last weekend of the 2011 regular season. Still, the end result was the same: a win. That’s what matters! 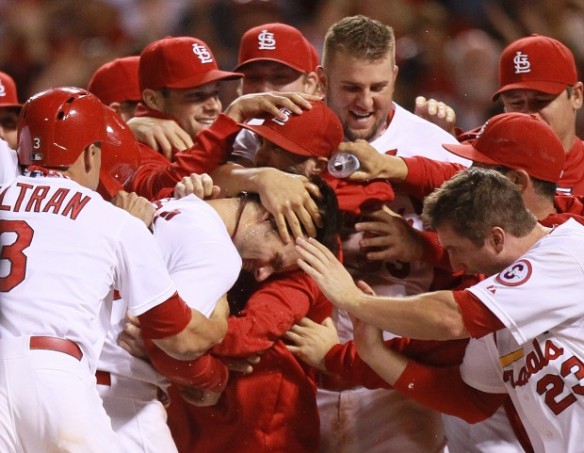 So, for today, the Cardinals have a one-game lead in the Central again. Thanks to Kyle Lohse’s amazing performance for the Brewers last night, the Reds fall to 3 1/2 back while the Pirates are a game back.

Things pick up again tonight at 6:15 p.m. Central Time, as James Paxton and Michael Wacha gets the starts. The Cubs and Pirates play at 6:05 p.m. Central, while the Reds and Brewers are at 12:05 p.m.