The St. Louis Cardinals lose a heartbreaker in the postseason and now face a must-win game — where have we seen this before?

Oh, that’s right. Last October. And the October before that. 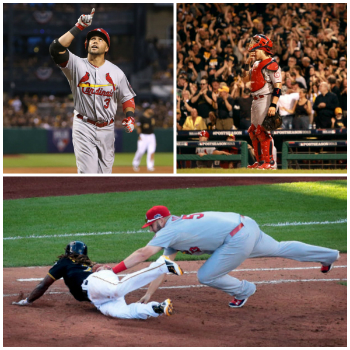 And how did those particular division series turn out?

Yes, it’s a very familiar October situation in which the Cardinals find themselves after falling to the Pittsburgh Pirates 5-3 yesterday. The game was definitely winnable, which perhaps makes the loss even more painful.

Too many of the automatics from the 2013 Cardinals — hitting with runners in scoring positions, the rookies in the bullpen coming through when called upon — didn’t happen.

So here we are.

One person who is automatic in October, and continued the trend yesterday, was Carlos Beltran. You’ll remember that he tied Babe Ruth on Thursday with his 15th career postseason homer. Thanks to his eighth inning game-tying blast off Mark Melancon yesterday, he’s now surpassed The Babe with his 16th in 136 at-bats (compared to Ruth’s 15 in 129 at-bats). Surprisingly — or perhaps not, given the record at PNC Park this year — that was the first home run the Cardinals have hit there this season.

Beltran also drove in the first two runs for the Cards, in a fifth inning where Francisco Liriano was certainly not the typical one we’ve seen all season. Jon Jay led off the inning with a single, followed by a walk to Pete Kozma. Joe Kelly attempted to move them up but fouled out bunting, while Matt Carpenter continued his struggles at the plate and struck out. That was no matter at the moment with Beltran up next, since he delivered to tie the game then at 2.

Yet Beltran, despite how good he is in October, needed a little help. While he was two for three with all three RBI, the other Cardinals hits — Kozma’s two, Jay’s fifth inning single, Yadier Molina’s eighth inning single and Matt Adams lead-off single in the ninth — weren’t productive. And, from the team that led the majors in hitting with runners in scoring position, that’s disappointing.

Adams did have a good day defensively at first base, as he made some great plays and recorded all three third inning outs (including an unassisted double play, pictured above, where he fielded a Justin Morneau line drive and caught Andrew McCutchen before he could get back to the base).

The atmosphere at PNC Park was as expected following last week’s crazy wild card. The black-clad crowd, the uproarious cheers and even the chanting of Joe Kelly’s last name. Yet Joe wasn’t bothered by the noise and he was decent enough — though, like Liriano against the Cards, he wasn’t as great as he’s been facing the Pirates. An error by Kozma in the bottom of the first led to a Marlon Byrd two-RBI single.

In the sixth is when the usually automatic proved not so this time. Following a walk to McCutchen and a double by Byrd, Pedro Alvarez was wisely intentionally walked. Bases loaded, one out — yes, perfect situation for Seth Maness. But, for second straight game, Maness didn’t deliver. Instead of a grounder, Russell Martin hit Maness’s first pitch to center for a sacrifice fly and a 3-2 Pirates lead — and then Maness got the ground ball he needed to retire the side.

John Axford pitched a perfect seventh, which led to Carlos Martinez in the eighth of a now-tie game after Beltran’s homer in the top of the inning. McCutchen led off with a double, but was thrown out at third when he tried to advance on a grounder by Morneau. (TOOTBLAN, anyone?) A walk to Byrd followed that, however, to put two on and Alvarez coming up. No problem — perfect situation for Kevin Siegrist, as Jenifer Langosch wrote:

The matchup overwhelmingly favored St. Louis. Alvarez entered with a .180 average against lefties. Siegrist, who hadn’t been scored upon since a July appearance in Pittsburgh, had limited left-handed batters to eight hits in 68 at-bats.

But no one has driven in more runs against Cards pitching in the last two seasons than Alvarez, and he added to that total with one that particularly stung. His single pushed in the go-ahead run. Martin followed with an RBI single to pad the lead.

Adams tried to get something going with his single in the top of the ninth off Jason Grilli. Yet Jay, Kozma and Daniel Descalso were retired in order to end it.

Which brings us to today. And when the going gets tough, always listen to the team leader, right? And Yadi put in pretty succinctly after the game: “I mean, it’s now or never.”

In Wacha we trust, as Michael takes the mound today starting at 2 p.m. Central Time. Charlie Morton goes for the Pirates.