Michael Wacha, the boy wonder, has done it again.

This time, though, it was on a stage far brighter — and louder — than he’s ever known before. You wouldn’t know that from watching him, though.

Just 18 months removed from college ball, Wacha was given the daunting task of beating 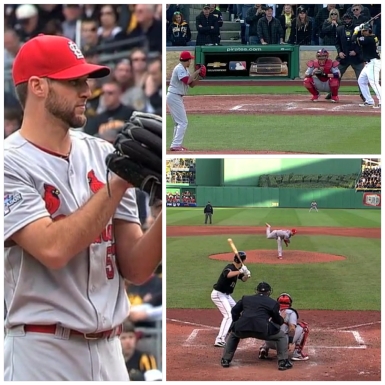 the fairy-tale Pirates at home with the Cardinals’ season on the line. No pressure, or anything.

Just five months removed from his very first big league start, Wacha, who had made a couple trips back and forth between Memphis and St. Louis, took the mound with a rare combination of wide-eyed innocence and unflinching competitiveness. He wasn’t afraid of the rowdy crowd, the high stakes, or the hungry lineup he’d face. Perhaps he didn’t know to be scared. Perhaps he’s just that mature beyond his 22 years.

He was also just 13 days removed from his last start. You know, that one-hit affair with the Washington Nationals that could have been no-hitter, save for the infield hit with two outs in the ninth. That performance may have given Mike Matheny the extra confidence he needed to hand this rookie the ball on Monday.

Like Matheny has said before, a lot of things could have gone wrong. Fortunately for him, they did nothing of the sort.

Armed with a new toy — a curveball that confused the Pirates — and his trusty fastball/changeup combination, Wacha mowed down the Pirates and their hopes for celebrating in front of their home fans.

The first 15 batters he faced quickly returned to their seats in the dugout — the first time a Cardinals pitcher has accomplished that feat in a playoff game. He carried yet another no-hitter late into the game, cruising along until Pedro Alvarez blasted a long ball out the back of PNC Park. His nine strikeouts tied him for the most by a rookie pitcher since October of 1997. He threw 96 total pitches — 60 for strikes. Fourteen times the Pirates batters swung and missed.

The two-run shot by Matt Holliday in the sixth inning was all Wacha needed, thanks to a couple of assists in the eighth and ninth innings.

We knew the kid was going to be good. We just maybe didn’t expect him to be this good, so soon.

When Adam Wainwright and Yadier Molina raved about him in spring training, and Matheny sang his praises after his first few starts, it was evident he had an enormous up-side. But there may be no higher compliment than for Chris Carpenter to be impressed.

If anyone knows what it’s like to pitch with all odds against you, knowing your team is counting on you to extend the season, it’s Carp. He also knows a thing or two about wanting the ball in a win-or-go-home game.

“It’s not rising to the occasion. It’s just that you want it,” said Carpenter, who two years ago to the day shut out Philadelphia in a division series Game 5. “He’s not scared of this. He wanted to pitch. He wanted it. You could tell. I know he’ll be all nice and say what he says because he’s this super great kid and he’ll smile as he says it. But I guarantee inside he was thinking, ‘I hope I get that (gosh darn) ball because I don’t want any one else to have it. I can take care of this.’”

And it wasn’t just Wacha that caught Carp’s attention (and led to a few quotes as colorful as you might expect from the Ace!). The way that three rookies 23 and younger closed out a one-hit victory proved their pedigree.

Carlos Martinez came in with one out in the eighth. Thanks to Molina doing what he does best, a failed hit and run attempt resulted in a caught stealing. Then, unfazed by the previous day’s loss, Martinez fired a beauty of a curveball into Jose Tabata who went down swinging.

Then, in the ninth, Trevor Rosenthal was called upon to close it out. Two quick outs followed by a walk brought up none other than Andrew McCutchen as the winning run. On a 3-1 count, Rosenthal got the MVP candidate to reach for a 96 mph fastball and pop it up to Matt Carpenter.

These kids are good.

And what about Matheny? Much has been made about his often-questionable decision making, particularly with his handling of the pitching staff. All three pitchers used yesterday have been part of the debate on more than one occasion. All three have had moments where they — gasp! — actually looked like rookies. But, methodical Matheny had a plan all along. Perhaps putting these kids in unfamiliar and pressure-packed situations throughout the year gave them some level of familiarity with the butterflies they’d surely feel. Maybe Matheny’s insistence on putting his faith in them even after struggling allowed them to have faith in themselves. It’s possible that Matheny was onto something.

If this was a test, Matheny and his rookies passed with flying colors.

And now, they get to go home to play in the kind of game no one in the Big Leagues does better than the Cardinals.

The Cardinals are 14-6 all-time in winner-take-all games. That’s the best in MLB history. They’re 7-1 at home in such games. And they’ve won 6 of the last 7 with their backs against the wall. The one they didn’t? Last year’s NLCS Game 7.

If I haven’t forgotten the image of Matheny standing on the dugout steps in the pouring rain, soaking in the disappointment of failing to capitalize on their chances to advance to the World Series, I promise, neither have they.

Wednesday, they’ll have a chance to move one step closer to erasing that memory. And, they’ll do so with none other than Adam Wainwright on the mound.

2 thoughts on “Matheny’s Rookies Living Up To High Billing”