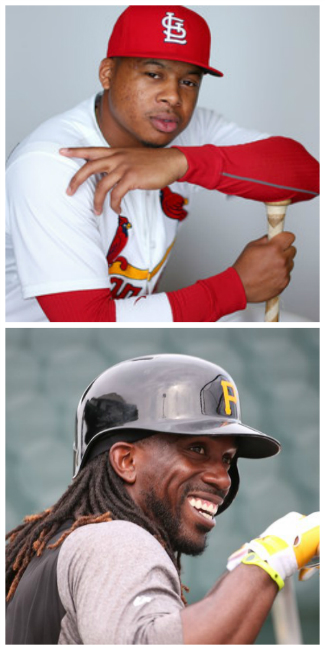 Chances are very good that both have the same birthday wish, as the Cardinals and Pirates prepare to battle in Game Five of the NLDS tonight: to be spraying champagne in the clubhouse after his team’s victory, since he and his team will be moving on to face the Dodgers in the NLCS.

Since it’s the decisive Game Five, of course, only one’s wish will come true.

Tonight’s game is the 24th time in 2013 the two teams have played each other. No surprises left at this stage, nothing new — even though last Friday, in Game Two, the Cardinals did actually have something new in facing Gerrit Cole for the first time.

But we know how that played out, with Cole allowing only two hits (including a Carlos Beltran home run) in six innings as the Pirates cruised to a 7-1 win. Chambers had his only at-bat of the series in the sixth inning as he pinch-hit for Randy Choate and launched a long fly deep to centerfield — which McCutchen caught.

We obviously know how Wainwright did in Game One, shutting down the Pirates for seven innings and giving up only three hits (including a Pedro Alvarez home run) while the Cardinals had an easy 9-1 victory. McCutchen had one of those hits, a fourth inning single. He singled again in the ninth inning, off Trevor Rosenthal — something he couldn’t do with two out in the bottom of the ninth in Monday’s Game Four. He popped out to Matt Carpenter to end the game and send us to tonight’s Game Five.

Of the 23 games played this season, the Cardinals have won 11 and the Pirates have won 12. Not that any of this necessarily matters tonight, although of course every Cardinals player and every Cardinals fan is wanting win number 12 in the series to move on and continue the oh-so-impressive streak of always coming through when October’s must-win games occur in the NLDS.

Yet every Pirates player and every Pirates fan wants to keep that season total on their side, to win number 13 over the Cardinals in ’13 and continue their magical season onto the NLCS. When their backs have been against the wall — such as needing to beat Cincinnati in the final weekend of the regular season so the wild card game could be at home, and needing to beat them again in the wild card game to advance to the NLDS — they’ve come through. Yes, of course they could have won at home on Monday and we wouldn’t even be here today — but Michael Wacha had a little something to say about that. As did Carlos Martinez and, as already mentioned, Trevor Rosenthal. Plus their backs weren’t necessarily against the wall — Game Five was still out there as a possibility.

The Cardinals have Game Five NLDS experience on their side, as this is the third straight year they’ve played this decisive contest. Two years ago, it was Chris Carpenter and the dramatic 1-0 win over the Phillies in Philadelphia, quieting the home crowd there. Last year it was the incredible comeback after being down 6-0 to beat the Nationals 9-7 in Washington, once again silencing what had been a raucous home crowd. We heard for ourselves again how awesome that quieted crowd really is on Monday afternoon, following Matt Holliday’s home run that silenced PNC Park.

So tonight is a new experience for a Game Five: at Busch Stadium, the crowd on the Cardinals side. A definite home field advantage, and one the Cardinals want to use to their advantage.

And, after the outcome of this particular Game Five tonight, whose birthday wish of spraying champagne will come true — Adron’s or Andrew’s?