So here we are, the morning of your first home World Series game. Hopefully you will get a great and well deserved ovation from the Cardinals fans at Busch Stadium tonight, both as recognition that after 2,064 regular season and 45 postseason games you finally reached the Series and also for what you’re playing through just to be in there at all. Because, ouch. 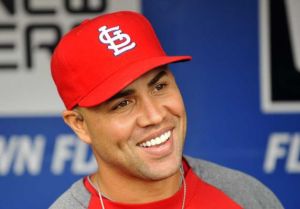 That literal and figurative pain both came on the same play Wednesday night, of course, and I found myself getting angry at the baseball gods. Like, what kind of deal has David Ortiz made with them anyway? Why does Fenway Park have to be so cruel to the opponents? (Seriously, Red Sox fans are arrogant enough anyway.) How can it possibly be that you finally make it to the World Series after all this time only to have to leave your first game in the second inning, and after saving a grand slam?

Yet there you were, back out there in Game Two despite the pain of your bruised ribs. Singling your first time up and driving in the final run as the Cardinals won and tied the Series. What you endured physically to be out there is so apparent in this video that was posted yesterday, especially in that sigh as you walk down the long hallway to get to the clubhouse.

My admiration for you definitely increased upon seeing that, and it has grown ever since you became a Cardinal. Although I will readily admit I wasn’t at all fond of you before — you made me mad at every game I saw you play in person. First was Game One of the 2004 NLCS at old Busch Stadium. You homered in your first at-bat with Craig Biggio on and you later singled and scored when Lance Berkman homered (I despised him them too) — yes, the Cards came back and won, but you had to make it difficult. Same thing the next night, when you had to homer in your first at-bat off my poor Matt Morris. I said many not-nice things about you (and Lance), even though Scott Rolen in particular and Larry Walker and That Guy Who Used to Play First Base for the Cards more than made up for it and Game Two of the 2004 NLCS remains the most thrilling game I’ve been at.

Then there was 2008, my one and only trip to Shea Stadium on July 27. Cardinals vs. Mets on a drizzly and cool day — and the game for the Cards was just as gray and dismal as the weather as they lost 9-1. Johan Santana had his first complete game as a Met, Kyle Lohse was awful, you drove in a run and — worst of all — robbed Ryan Ludwick of a home run with (now I can admit it) an incredible leaping catch over the wall. It was Endy Chavez-in-Game-Seven-of-the-2006-NLCS-like. (And that’s the only mention I’ll make of that game …)

Plus those in-person games were far from the only times I really couldn’t stand what you did against my Redbirds — obviously.

So, yes, my feelings for you were not positive — until you became a Cardinal. Now I’m thankful that you’re here, grateful for all that you’ve done in 2012 and 2013, thrilled for the opportunities you have ahead of you still and so impressed by the respect and love shown to you by your teammates. Yes, I still tear up when watching your speech in the locker room after clinching the National League pennant a week ago and I loved hearing what Joe Kelly had to say about you yesterday — that there’s not one person in the Cardinals clubhouse who doesn’t look up to you. Same with David Freese’s comments last week.

Here’s to you and your teammates doing just what you said last Friday and getting it done — winning three more games (though it’s certainly not going to be easy), clinching the 12th Cardinals World Series championship, earning a much-deserved World Series ring just like your old buddy Lance Berkman did two years ago.

Wishing you nothing but success in the rest of the World Series — plus good health and some good karma from the baseball gods. I’m really glad you’re here.