The manila envelope arrived on Thursday, the familiar handwriting of my Cardinals fan uncle Jim across the front scrawling out my name and address.

Upon removing it from the mailbox, I could immediately tell it wasn’t his usual gift of a Cardinals t-shirt — that kind of package will likely arrive in the months ahead, after the postseason merchandise ends up on clearance. 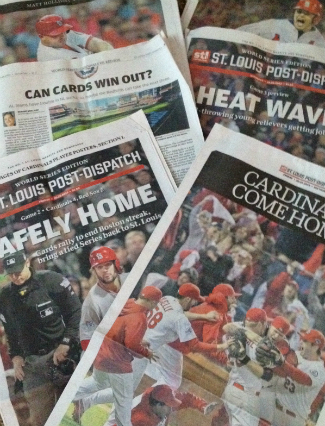 No, this envelope contained something sturdier yet flexible. A magazine, perhaps?

I ripped open the end of the envelope and saw newspapers. Further inspection revealed special sections from the St. Louis Post-Dispatch on the World Series. Given the timing, not even 24 hours after Game Six and the Cardinals season had ended, I could only take a quick glance before replacing the newspapers in the envelope and tossing it on my desk. Too painful to investigate right away.

This morning, up early, curiosity — and coming to better terms with what happened in the final three games of the World Series — got the best of me. With a cup of coffee in hand, I went back to the envelope and removed the newspapers to have a closer look. They were all from Oct. 25 and Oct. 26, last Friday and Saturday’s editions of the Post-Dispatch, and are filled with stories on the Game Two victory in Boston and previews of Game Three at home in Busch Stadium plus page after page of glorious, full-color player and game photos.

Some of the articles were ones I’d read online last week, yet seeing them again and in print and now knowing just what was to come gave me a much different perspective. Especially of Bernie Miklasz’s column from one week ago today, in the photo above at the top left: “Can Cards Win Out?”

It’s not the headline that makes it painful after the fact. No, it’s sentences like “A new story line rapidly emerged in Boston. The Red Sox can now win the World Series at home … It will be fun for the Red Sox to capture the World Series in front of their adoring audience at home — something they haven’t done since 1918. You see, the Cardinals actually did the Red Sox and their fans a favor by winning Game Two. Just another example of those friendly Midwestern manners.”

Now, granted, the point of the column is to explain how the Cardinals could stop all that Red Sox certainty and celebrate their own championship at Busch Stadium, just like in 2006 and 2011. The rationale makes sense, especially when you think about how we felt a week ago. Although it hurts all the more now to read that when the Series has been tied 1-1, the team winning Game Three has gone on to become champions 55 times out of 80.

Yet there is other content that brings a smile, like the feature from last Saturday by Derrick Goold on Trevor Rosenthal and Carlos Martinez and their flame-throwing success.To see them blossom on the national stage — or, in Trevor’s case, blossom further — was a high point of October, for sure. And it’s wonderful to read all the stories about Game Two’s win. Then there are the full-page posters from last Friday, especially enjoyable because the moments captured in so many of the individual photos are easily identifiable even without any captions. Adam Wainwright’s exultation upon the final out of NLDS Game Five. Michael Wacha’s scream upon striking out Juan Uribe with the bases loaded in NLCS Game Two. David Freese’s leap upon scoring the lone run of that same game. Matt Adams’ fist pump upon the final out of NLCS Game Six. (And there are posters of Shelby Miller and Edward Mujica, though their moments are not easily identifiable …)

I still haven’t turned my television to MLB Network, and won’t do so yet for a while, not when All-Sawx-All-The-Time! is guaranteed to be the channel’s programming of choice. I haven’t read much from any national baseball writers either, instead just focusing on my fellow Cards bloggers and the Cards MLB site and the Post-Dispatch.

But, as this morning’s ability to actually look at these newspapers demonstrates, things are getting easier to take. I do realize that fans of 29 teams end their seasons, whether in late September or throughout October, feeling varying degrees of the disappointment we all feel now too. And the baseball clock just keeps ticking along too, oblivious to emotion — has Carlos Beltran played his last game as a Cardinal, as we know Jake Westbrook and Edward Mujica have?

That clock will keep ticking along now too, with just 100-plus days remaining until that landmark February day when the Cardinals pitchers and catchers will report to Jupiter, Fla., for spring training 2014.

Until then, we have plenty of memories — and plenty of speculation about the future — to keep us occupied.