As you likely know by now, Andrew McCutchen of the Pittsburgh Pirates was the overwhelming winner in the National League Most Valuable Player voting, capturing 28 of the 30 first place votes. Yadier Molina received the other two first place votes — cast by Derrick Goold and Rick Hummel of the St. Louis Post-Dispatch — yet finished in third place with 219 total points. Paul Goldschmidt of the Arizona Diamondbacks was second with 242 points. Matt Carpenter finished fourth with 194 points. 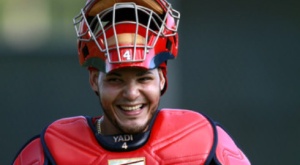 Frankly, I figured McCutchen would win — though I did think Yadi would finish second. Because for as great as Yadi is and as invaluable as he was to the Cardinals’ success in 2013 (and 2012, and 2011, and …) it seems to me every single thing he does is just expected from him now.

All the unquantifiable “intangibles” being touted as reasons why Yadi is without a doubt most valuable are all very true. Defensively, he is without peer. He strikes fear in opposing baserunners so that they often don’t even attempt to steal second. He is the heart and soul and leader of the team, taking charge of the pitching staff — no matter who comprises it, from veterans to rookies — and provides whatever type of counsel and calming is needed during the heat of a game. Plus he’s improved his batting average, number of hits and RBI every year since 2010 and even led the National League in hitting for a stretch this season.

He exemplifies this quote from Aristotle: “We are what we repeatedly do. Excellence, then, is not an act, but a habit.”

Excellence and Yadier Molina? Absolutely you’d use that word to describe him. It’s just Yadi being Yadi.

Thus the expectation — that’s what he’s supposed to do, game in and game out and year after year.

Which is why I’m not surprised at the MVP results other than the margin of victory for McCutchen.

But maybe I shouldn’t be surprised about that either. Because, like it or not, it seems like two things matter most in today’s baseball world are narrative and numbers.

When it comes to narrative, there was none bigger than the 2013 Pittsburgh Pirates. The details, of course, are very familiar: a Cinderella story of the team that, despite making strides in 2011 and coming even closer in 2012 before collapsing, had 20 straight losing seasons before winning 94 games this year and making it to October. And McCutchen was the center, literally, of it all.

The narrative for the Cardinals, and Yadi, doesn’t quite have the same “great story” details on a big-picture scale. Because, even though we know each and every detail of the many injuries and the many rookie contributors and the ups and downs and struggles the 2013 team went through and the indelible impact Yadi made throughout all of it, the Cards are a perennial contending team which did just that again — made the playoffs for the third straight year and seventh time in the last 10 seasons.

Beyond those sportswriters, though, Yadi’s contributions and value are well known and touted. On MLB Network Wednesday night, in previewing the MVP announcement, both Dave Valle and Mitch Williams said Yadi would have their MVP vote — citing the very things we know and appreciate about him, from his handling of the pitching staff with such a rotating cast of so many rookies this year and his increased offensive production. Yadi was mentioned last week on the network, in a discussion about the hiring of former catcher Brad Ausmus as the Tigers manager, as a future manager as well because of his supreme knowledge of the game and way he leads the team.

The greatness and value of Yadier Molina are just part of who he is, game in and game out, season in and season out. We know it, we love it, we applaud it.

But when that’s the expectation — and that expectation is consistently fulfilled — not everyone sees it as award worthy.

4 thoughts on “Does Yadi’s Greatness Work Against Him in MVP Voting?”