The St. Louis Cardinals are using social media to spread a little holiday cheer and give away 2014 ticket packs and prizes with “Fredbird’s Winning Wonderland” contest. 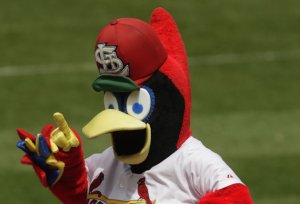 Tuesday through Friday, fans will be given a contest prompt on one of the aforementioned social sites where they have 24 hours to enter. Each day, one winner will take home a ticket pack, while additional runners-up will receive a Cardinals holiday stocking prize pack featuring the most recent issue of Cardinals Magazine, a stuffed bear and more.

“Fans can show their holiday spirit and win one of this season’s most sought-after holiday gifts – 2014 Cardinals tickets,” said Ron Watermon, Director of Public Relations and Civic Affairs for the Cardinals. “It doesn’t matter to Fredbird if you’ve been naughty or nice so long as you show your creativity and engage with us.”

Throughout the week, Fredbird will also be using the Cardinals’ Twitter (@Cardinals) to give away additional prizes like the 2014 Cardinals Calendar themed around the team’s 19th National League Pennant, and the 2013 Cardinals Yearbook which serves as a definitive celebration of Stan Musial’s Hall of Fame career.

For all of the contest details, official rules, and a sneak peek at the four ways fans can win tickets, visit cardinals.com/winningwonderland.

Cardinals ticket packs are the best way to guarantee seats to key promotional games and highly-anticipated matchups in the 2014 season. Both five and ten-game ticket packs are on sale now at cardinals.com/holiday or by calling 314.345.9000. Five-game pack prices start as low as $79.

The official 2014 Cardinals Calendar celebrating the team’s recent National League championship is on sale now for $15 at the Busch Stadium Team Store, local retailers, and by calling 314.345.9303.

The 2013 Cardinals Yearbook is the most detailed, official tribute to Musial’s legacy featuring scores of rare photos and more than 250 pages of classic Musial moments. For more details, or to purchase the Yearbook, visit cardinals.com/yearbook.

The Cardinals have experienced dramatic growth in the team’s various social media platforms in recent years, most notably on Twitter (@cardinals) and Facebook (facebook.com/cardinals). In May of 2010, when the team used Twitter to launch Stand for Stan to celebrate Stan Musial, the team had just over 5,000 followers. Today, the Cardinals have nearly 400,000 followers on Twitter, making @Cardinals one of the largest accounts in Major League Baseball. The Cardinals have more than 1.575 million fans on Facebook, as well as a growing presence on other social media platforms such as Instagram (@cardinals – 123,000+), Vine, Tumblr, Pinterest and Google Plus.

The Cardinals’ various social media efforts, such as the Stand for Stan Campaign, Facebook Fridays with Fredbird, the Like Mike Facebook campaign, #FreesePlease, #VinetheVote & #VoteSTL All-Star balloting campaigns, and the #Nestflix Instagram original video series #TheFrontOffice have been designed to take advantage of communication mediums that are transforming how fans interact with the club. Fans can learn more about the club’s social media by visiting cardinals.com/connect.