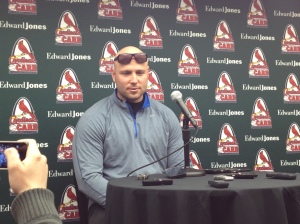 Taking the microphone chair while hulking out more than any other Cardinal, Matt Holliday quickly had to address the hype he had received from teammates the previous couple days on his workout regime, which is an NFL style process.

“We do some sled pushing and some tire flipping as well as some fireman carries.   I threw (Rosenthal) over my shoulder and he threw me over his shoulder. It’s a 20 meter carry kind of workout.   It’s a 1 on 1 thing and we have encouraged Oscar Taveras to stay fit as well. ”

When the talk turned to the signing of Jhonny Peralta, Holliday was excited to get a player who could produce.  “He’s a good player. He’s had a long career and I’m excited to see him play.”  Cardinals General Manager John Mozeliak had mentioned he talked to Holliday before signing Peralta, since the veteran slugger has long been against PED users.  Holliday quickly clarified what his stance on the subject really is.

“I am against PED and always will be.  I am also a forgiving person and he served his suspension, and those are the rules of the game.  Just because I’ve said it publicly doesn’t mean I am the only one against it.  Whoever doesn’t use is against it.  Everyone wants a level playing field who isn’t using.

Asked about being different anybody else, Holliday quickly shot that down as well.  “I don’t think I am any different than anybody else other than being a player who played for a long time who has a certain platform.  For me to be any more outspoken, is not accurate because everybody who is against it wants the same thing I do.”

How do you make it tougher for PED users?  Holliday advised making the suspensions harsher.

Holliday offered other tidbits of insight as well.

When asked about the departures of Beltran and Freese taking away two clubhouse friendly leaders, Holliday reminded us of others in the clubhouse.  “That’s been part of my role since I got here.  Being a leader.  We got Yadi and Adam and others who have been here for a while.  Nothing has really changed there.”

Holliday doesn’t think a speed element has to be present in order to win and while there are more outfield candidates this spring, he wants to play everyday if he is healthy enough to do so.

Being the veteran leader that he is, Holliday is looking forward to working with R 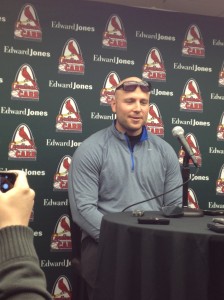 andall Grichuk, the new minor league prospect who came over in the David Freese trade.

“Anytime you get new players in camp, it’s exciting.   Early in camp, outfielders are broken up together so I am very excited to spend time with him (Randall), Peter and Taveras.”

Looking at Holliday, you can see the man is built out of pure muscle and that comes from a strict training method every offseason.  “I take my workouts every offseason and I push myself harder every year.  Those are always my goals.”

While he is against PED in sports, Holliday forgives and lets the circumstances be and doesn’t hold grudges.  It’s a noble stance and one he nails into the ground every time he flips a tire or complete a workout.  Like Chris Carpenter and Wainwright, Holliday sets the model for consistency year in and year out.   My guess is the rest of the team will follow his lead.

1 thought on “Matt Holliday: Fair and Firm on PED Usage”