Tony La Russa never wasted any words when speaking with the media during his career as a manager.   While 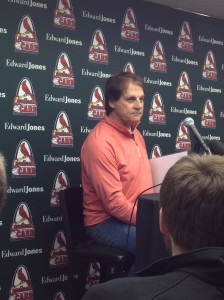 those words could be short ended and sparse at times, he is direct and carried a dry sense of humor about him.

When these media sessions go well, the player/coach treats them like a conversation and not an interrogation.   La Russa simply sat there and talked to us before he signed for the fans.  Here are are his thoughts on various subjects.

On Sunday, La Russa gave an intimate 25 minute conversation about his years in St. Louis, instant replay, and getting into the Hall of Fame.  It was one of those conversations that you didn’t want to see end and wouldn’t soon forget.

On getting into the Hall Of Fame-

“I had convinced myself it wasn’t going to happen.  This has been a surreal experience.  All the pieces they give you and the other guys.  It’s heavy stuff.  You get the call and they don’t tell you anything else.  They tell you to come down.   They tell you that your life will be different.  There’s some far out stuff that is impossible to comprehend.”

La Russa, even after making it into the Hall, isn’t comfortable being a part of it.

“I still think the Hall Of Fame is a place for players.  I always thought the managers in there were guys like Earl Weaver and Sparky Anderson, who lit the room up with baseball.   When we won the Championship in 2006, there was a feeling something was there, having won one in each league(like Sparky).  It may be hard to avoid it.   I am not comfortable with it and the biggest reason is I never thought good fortune was hall of fame criteria.  I have been lucky enough to be in places like Chicago, (Oakland), and St. Louis.  The only thing I want is to not disrespect Chicago or Oakland.  They will make their decision soon.”

One year after Stan Musial passed away, the legendary Cardinal still comes to Tony’s mind.

“You don’t ever forget about people like him(Stan Musial).   One of the best things DeWitt has done is make sure to remind his players that they are just a part of history.  The greatest example of what a player should be.  With Stan, he is the model.  Stan had all the qualities.  10 out of 10.  He is the perfect guy.”

Which years stick out to him as special in some way during his time in St. Louis?

“It’s impossible to narrow it down to one.  he hardest one was 1996.   The most stubborn.  We had gotten away from the Cardinal approach.  It clicked in the second half and we almost got into the World Series.  That was tough.”  The changes the front office made in 2000, we knew we were better and we won. 2002 was most challenging because it wasn’t baseball.  Just a terrible tragedy that devastated our team.

2011 is a testament to the character of that team.  I love that club.  We could have lost on the last day of the season and I would say the same thing.  That club had guts and refused to lose.  Never gave in and a lot of that was in 2002 as well.  2004, we had been there 3 times.  When we beat the Astros and Roger Clemens after Jimmy won Game 6, I had never been happier in my life.  2006 when we had 80 or so wins.  We end up winning the thing.  In 2011, I knew I was done.  Seeing it all play out.   I kept telling myself that it wasn’t possible but it happened.   You have to put them in a group, all the years.”

What was the connective tissue in La Russa’s teams and how they played?

“We had a simple approach.  You play a hard 9 innings or you don’t play.  We all worked at creating that and I believe we were tough to play against.”

How do you feel about the changes you helped make to instant replay?

“This replay thing.  I’m looking forward to it.  The limited dramatic impactful challenge that is corrected and I am going to be totally into it.  We are going to be monitoring it.  Help the guys use the process better.”

The cut and dry take away from the new instant replay system.

“Number 1 is the first time in history, that you have a play go against you, and you can go out there and replay it.   The second thing is how do you handle that.  The one thing I like about the 1 challenge is that if you get it right, you get 1 more.  Think of it this way.  If you are the Cards last year and you have Beltran on the bench.  When do you see that weapon?  You may have a chance in the 6th inning.   Is it better to use him in the 8th or 9th?  That’s exactly what the replay is.  The replay is more fair.

You can go out and argue but the umpire will ask you if you want to challenge it because I am not changing the call.   That’s all it takes.  Your video system will tell you to challenge or not challenge.  The way you have to look at it is that it’s a tough call.”

La Russa does point out that If the manager has used his replay chance and there is a controversial play in the 9th inning, the umpires can invoke the ruling themselves.

He sounded upbeat about the new system and wants to see it in action.   He also wants to clarify the rumors surrounding his name popping up in Seattle’s front office job search.

“I’m with the MLB team.  The Seattle situation is potentially a wonderful opportunity.  I was disappointed my name came out as being more than it really was because it never went further than just being mentioned.  I think the job will be filled without me getting a chance to interview. They have some great candidates out there.  I’ve learned a lot about what an organization does and how it connects during my time with all three clubs.”   It is something I’d like to get into competing again but I don’t see it being in Seattle.”

This much is known.  La Russa still has the hunger to compete in baseball and got that experience over the majority of his own life.

“I went to 50 years of graduate school about competing, which is what our business is about.  Our product is our team against another team.”

While he won’t be in the dugout managing any time soon, La Russa is going to entrench himself in this game for a little while longer.  When talking about the past or the future, there’s still a fire in La Russa’s voice that isn’t ready to burn out just yet.