The St. Louis Cardinals today announced that every 2014 regular season game will be televised locally or nationally as well as broadcast on the Cardinals Radio Network.

Ten regular season games are currently scheduled to be carried exclusively as part of Major League Baseball’s national television packages with FOX (aired locally on KTVI), ESPN and new this year, FOX Sports 1. The Sept. 20 and 21 games against the Cincinnati Reds are yet to be scheduled but will be carried by FOX Sports Midwest or be nationally televised. The schedule is subject to change based on future Major League Baseball national television selections.

In addition to televised game coverage, KMOX (AM 1120), the team’s flagship radio station, will carry every regular season game, as well as 18 Spring Training games on the Cardinals Radio Network and various shows live from Ballpark Village. This year marks KMOX’s fourth season returning as the flagship station and 54th year overall. Broadcasters Mike Shannon and John Rooney are heard on 126 radio stations in nine Midwest states as part of the Cardinals Radio Network. 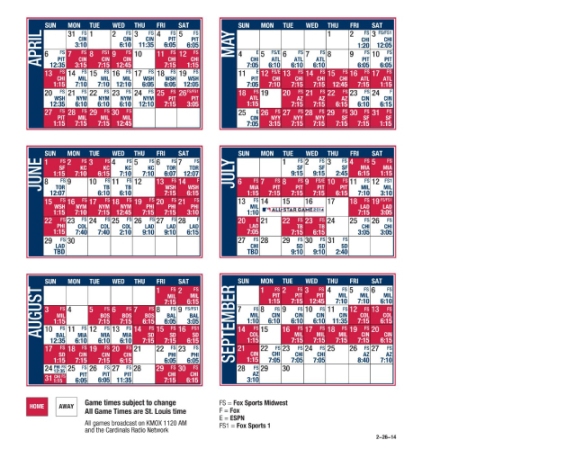