As you’ve no doubt heard by now, since rumors began circulating during last night’s game, the moment every Cardinals fan has been waiting all season for is finally here: Oscar Taveras is coming to the big leagues. 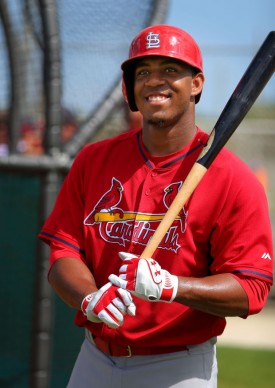 Oscar will be in St. Louis today and is expected to be in the lineup for the game against the Giants this afternoon at 1:15 p.m. He is taking the roster spot of Matt Adams, who is headed to the disabled list with a calf injury.

Taveras has been doing extremely well at Memphis, hitting .325/.373/.524 with seven homers and 40 RBI in 49 games. And, really, he’s been hitting during his entire career in the Cardinals minor league system, as Alex Halsted writes at Cardinals.com:

The outfielder will arrive in St. Louis on a tear. In his last 10 games at Triple-A, Taveras hit .462 with hits in all but one game, including two three-hit games and a four-hit game.

It’s safe to say we’ve all wondered what’s taken the Cardinals so long to promote Oscar — have they waited for financial reasons down the road, to prolong his arbitration years? — yet, as Derrick Goold writes, John Mozeliak says it has to do with playing time:

“He’s played his way to the big leagues,” Mozeliak said. “The real key is playing time. You can’t take somebody who has been a major-league player for three or four years who is performing at a high level like Allen Craig and say, ‘You’re not playing anymore.’ Look at how Matt Adams has played this entire season, and you’re not going to kick him to the curb. You’d have to be careful about that.”

But now, with Adams’ injury, Oscar’s time is finally here.

He’ll wear No. 18. And now we’ll just have to see how Mike Matheny actually uses him …

Game time this afternoon is 1:15 p.m., with Michael Wacha taking the mound as the Cards try to break their three-game losing streak. Starting for the Giants is Yusmeiro Petit.