No streak lasts forever (except, perhaps, the 100-plus year streak of the Cubs not winning the World Series). And the St. Louis Cardinals 6-3 loss to the Tampa Bay Rays brought numerous streaks to an end. 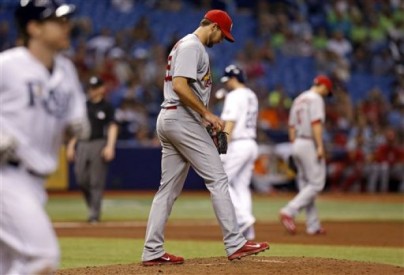 To begin with, the Cardinals three-game winning streak ended.

That also means, unfortunately, so did the consecutive shutout streak by the Cards pitchers after three straight games. The streak of not allowing a run did reach 30 innings before coming to an end, however — and that streak is a tremendous accomplishment.

The end of the pitcher’s scoreless streak also meant the subsequent finish to the Rays’ own such streak on offense, which had reached 31 innings (with 12 of those against the Cardinals).

Then there’s Michael Wacha’s streak this year of not allowing more than three earned runs in a game this season. He gave up four runs to the Rays in the fourth inning and he obviously was not at his best. Wacha walked four — two in the fourth inning — and didn’t strike out a batter, which not surprisingly was a career first (and thus another streak that came to an end).

The Cards had taken a 2-0 lead in the second inning thanks to Yadier Molina’s RBI single that drove in Matt Carpenter, who’d walked, and Allen Craig, who’d doubled. The RBIs were Yadi’s first in June and first since May 24. The lead increased to 3-0 the next inning when Carpenter singled in Jon Jay.

And then the fourth inning happened, and the lead disappeared.

In the fifth, the Cardinals did have a chance to score — they’d loaded the bases after Yadi singled, Jay was hit by a pitch and Mark Ellis walked to bring Peter Bourjos to the plate. He lined it to right-center, and it was gorgeous … gorgeously caught by Rays right fielder Kevin Kiermaier that is, in an absolutely tremendous leaping catch.

It had thus become that kind of night. Again. The only Cards baserunners after the fifth inning came via walk or hit-by-pitch.

For several weeks, manager Mike Matheny has been talking about the team needing to “find its identity” and describing how even a third of the way into the season the Cardinals didn’t have one. Or, rather, didn’t have one they wanted.

They were that team at times on this trip.

Sustaining it is the next goal.

“We saw some good days in Toronto where we saw almost every aspect we’ve been looking for,” Matheny said. “What’s going to be that launching point? We need to get our eyes off of that. It’s just about fighting now. … There have been times when we’re not playing the way we want and we’re looking for that one key hit or that one key win. We’re just going to have to grind. We’re going to have to be the grinding team.”

Yeah, being that team they have shown themselves capable of at times seems to be the real trick thus far in 2014. And maybe it’s just me, but it doesn’t seem like it should have to be such a fight and a grind — though, obviously, it has been through the first 66 games.

After today’s day off, the Nationals head to town. At the moment, they’re on a four-game winning streak and have taken three straight from the Giants with game four this afternoon at 2:45 p.m. Central Time. Starting tomorrow are Jordan Zimmermann and Lance Lynn, with game time 7:15 p.m.

1 thought on “All Streaks Must Come To An End, Unfortunately”