I’m not going to join in the fray over what Adam Wainwright said or did — frankly, I’d rather dedicate this song to Adam Wainwright instead — although I do want to talk about Derek Jeter’s first at-bat against him. 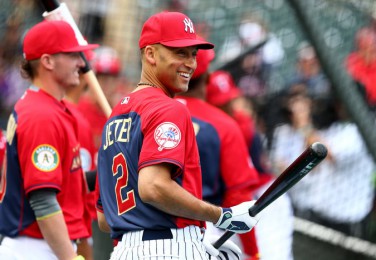 Yes, it was all choreographed to perfection beginning with the “RE2PECT” commercial running on FOX once the top of the first inning ended. Then, at Target Field, having the introduction of Jeter by the late Bob Sheppard was a wonderful touch. The standing ovation from the fans, the tipping of his helmet to the crowd, the requisite camera shots of Jeter’s parents in the stands, the applause by the all the National League starters on the field, the silence on the FOX broadcast so we could all absorb the moment, even the chance to hear Jeter telling Jonathan Lucroy “have a good one and congratulations to you, all right?” as the crowd begins to chant “Der-ek Je-ter” — top notch, of course, because that’s the way it was all supposed to be.

The first pitch from Wainwright, still silence from Joe Buck and the crew, the crowd settles down. Another requisite shot of Jeter’s family and then, through the silence, one man’s voice rings out …

He says it again, loudly and more clearly, as the second pitch is delivered. That of course was the pitch Jeter hit into the right field corner for his lead-off double, though you won’t hear that man’s chant on this video of the at-bat posted at MLB.com. No, there’s just silence there until Joe Buck exclaims “Into right! What a start!” as Jeter makes his way to second. But I recorded the game since I didn’t get home until just before the actual on-field action began, so I had the chance to rewind the DVR and watch the moment again, both last night and this morning.

And that moment — the voice who rose above all the scripted and prepared adulation — was perfect. Honest. Which is not ever what happens in these kinds of orchestrated productions.

While I have no problem with Derek Jeter at all — I like him and always have, as my friend Kat is a die-hard Yankees fan and has adored him for years and years — it’s the forced WE ALL MUST BOW DOWN AND HONOR DEREK JETER FOR EVERYTHING HE MEANS TO BASEBALL AND THE WORLD that annoys me. I didn’t like it back when the Cardinals had to honor him just because the Yankees finally were scheduled to come to St. Louis again in May after nine years, and I didn’t like it last night — even though of course I knew pretty much what to expect from the All-Star Game festivities.

We all did. We know the drill, know the routine. We just went through it at last year’s All-Star Game with Mariano Rivera.

Which is why the Over-Rated Chant Guy was so refreshing.

And, actually, my personal favorite Derek Jeter moment last night came in the top of the first inning, not the bottom.

It was Andrew McCutchen’s at-bat to lead off the game, when he grounded the second pitch he saw from Felix Hernandez to short. Jeter dove to his left to stop the ball, quickly got up and threw to Miguel Cabrera at first as Cutch ran full-speed down the first base line — and, as we’ve seen countless times against the Cardinals, Cutch at full-speed is pretty damn fast. See the whole thing again here.

Jeter smiled. Cutch grinned, and pointed over at Jeter.

Isn’t that a better tribute than anything else produced throughout the course of the evening?

And isn’t that — theoretically, obviously, and not reality anymore — what the All-Star Game really should be about: the best against the best, and truly giving their best effort? Especially since the game counts, after all …

It’s the unpredictability of baseball that I love the most, and in all likelihood what you love too. Which means, despite FOX and MLB’s best efforts, not everything can be scripted.

The most memorable moments come when things just happen.

1 thought on “Sometimes, The Greatest Moments Are Unscripted”