As we know, A.J. Pierzynski’s reputation preceded him. 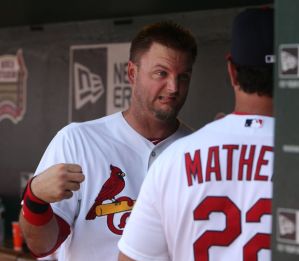 He was designated for assignment by the Boston Red Sox on July 9 — the very day Yadier Molina tore a ligament in his thumb sliding into third base. There was Twitter chatter that the Cardinals should sign Pierzynski once the full extent of Yadi’s injury was announced the next day, yet also much consternation since we also read how much of a jerk he is.

Fast forward to July 26, when he was signed by the Cardinals — at a time when they needed a little spark as they were in a 4-game losing streak that included being swept by the Rays and a loss the day before to the Cubs. Pierzynski immediately made an impact in his Cards debut at Wrigley Field, going 3 for 4 amid boos from the Cubs fans.

He’s now played seven games as a Cardinal, is hitting .320 in those games and was a key part of the comeback rallies in both last night’s and Sunday’s respective 3-2 victories. The Cardinals have won 6 of the 9 games they’ve played since he joined the team on July 26.

Yet now we find out some absolutely terrible truths about him, courtesy of yesterday’s Boston Globe:

Wanting to play with his kids? Wanting to read a book instead of goof off?

OK, so not all of the article was shiny and happy, as right after those sentences it said “He didn’t work hard enough pregame, or on preparation. He didn’t seem into it. He was aloof.” It also says he “never hid anything. He had had problems with teammates in the past and everyone knew it. He didn’t mince words, and said what he meant, with no filter.”

Open, honest — for the good or the bad. Is that all terrible?

There also was this:

Ozzie Guillen, now an ESPN analyst and Pierzynski’s former White Sox manager, said, “A.J. loves to play baseball. When things are good he’s got a lot of energy and he’s great for a team. He just hates to lose. There’s nothing wrong with that. I enjoyed him and I think the Cardinals will enjoy him.”

Plays with his kids, reads a book, says what’s on his mind, hates to lose and the Cards have won six of nine since he arrived?

Thanks to Mary Schless Gage for the article.