“It hasn’t been easy,” Matheny said. “There haven’t been a lot of laughers one way or the other. They show grit. They show fight. It’s a hard team not to love.” 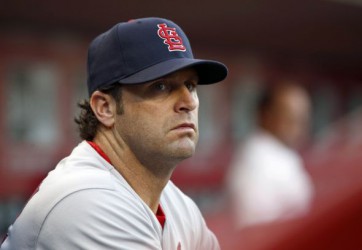 The Cardinals won last night 5-4, their second straight walk-off win over the Reds — this one on a walk-off hit by pitch to Jon Jay (although it wasn’t the first time this season the Cards won in that way.) The victory put them at a season-high 11 games over .500. And, following the game, manager Mike Matheny said the above words.

It’s a hard team not to love. Hmmmm. How many fans feel that way about the 2014 Cardinals?

There’s certainly been a lot of discontent among Cardinals fans this season, more than I remember seeing in a very long time, and I am right there with those not enjoying things much. The main reason: Mike Matheny.

In a post from Monday at Viva El Birdos — Mathenaging: Mike Matheny doubles down on double standards — Ben Humphrey really captures the discontent well. If you just need a quick summary, the subhead from that post will do: “Manager Mike Matheny is not the Leader of Men the Cardinals sold us upon his hire.”

Sure, I know not every fan feels that way — I see the giddy social media posts and the tweets exclaiming how their record is even better now than it was at this point in 2011 and the continued gushing over Matheny’s looks.

And I see the results from the games, even if I haven’t been as diligent in making sure I watch every single one like I have in past years. Yep, the record is 68-57, they’re 2 1/2 games behind the Brewers, they’re leading the wild card race by 2 1/2 games over the Giants and Braves at the moment.

There also are things to enjoy about the season. Jhonny Peralta’s play, which includes setting a new record for home runs by a Cardinals shortstop with his 17th last night on this mammoth blast. Lance Lynn’s success, which will be tested tonight as he matches up with Johnny Cueto. (As a complete aside on Lynn other than he’s starting tonight and the Little League World Series is under way, check out this article about his memories of his experience in Williamsport, Pa.) Pat Neshek’s emergence or resurgence or whatever the proper way is to classify his 2014 success. And, well … there have been great streaks and great moments by Matt Adams, Matt Carpenter, Kolten Wong and Oscar Taveras that have been very fun to watch. Even Peter Bourjos has had his gorgeous moments.

And it’s certainly looking very possible the Cardinals will again make the postseason. As we know very well, anything can happen then.

Maybe I’ll be more excited if that happens. Or maybe not, since it could just be reinforcing to Mike Matheny that the way he’s managed, the way he’s made his favorite players oh-so-obvious to the detriment at times of even the team’s chances of winning, is just fine since it produces results. Winning is all that matters, right? Even when it seems to come despite the manager?

Back to Mike’s quote at the top: he certainly touches on all the proper and traditional Cardinals themes, doesn’t he? Grit. Fight. That scrappiness and determination are hallmarks of The Cardinal Way. But a hard team not to love?

If you take out the “not,” absolutely.

And all because of Matheny himself.