Five-game winning streak, including a sweep of the Pirates with a tense 1-0 walk-off win yesterday. (Gorgeous job, Peter Bourjos, with that single!) A season-high 13 games over .500 at 76-63. First place after spending five months in second, with a three-game lead over the struggling Brewers. (Thanks for sweeping them, Cubs!) 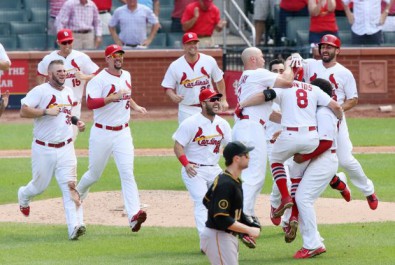 Is this the 2014 St. Louis Cardinals team we expected all season, finally arriving in September — just when it matters the most?

It certainly seems like it. And that’s definitely good to see.

They’re coming from behind to win — in four of the five games in this streak, the Cubs and the Pirates scored first. They’re scoring plenty of runs, with 34 in the past five games. They’re getting good pitching, especially with the nine shutout innings yesterday from Shelby Miller, Carlos Martinez and Trevor Rosenthal.

And the national media — remember, those who were just like all of us in picking them to win the NL Central and go far into October — are certainly back on board these days too.

Just when it looked like the National League Central race would be a doozy, a three-headed showdown between the St. Louis Cardinals, Milwaukee Brewers and Pittsburgh Pirates, leave it to the Cardinals to ruin the drama.

The Cards are the top story on Yahoo Sports’ MLB page at the moment, with the headline “Cardinals coming on strong in NL” and a story that includes this:

Baseball fans should know better than to count out the Cardinals, who have been one of the best teams in MLB the past decade. These 2014 Cardinals (now 76-63) are looking like one of those teams for whom everything comes together in the season’s most important month. They’ve ascended into first place, finally knocking the Milwaukee Brewers out of the division’s top spot this week. They’re getting healthy. They’re scoring runs. They’re looking dangerous.

Happier days indeed to see this kind of play from the Cardinals.

Plus tonight is the return of Michael Wacha, pitching in the big leagues for the first time since June 17. He’ll be limited to 50-60 pitches, which comes after just one minor league rehab appearance of 34 pitches on Sunday, yet it will be good to see him back on the mound.

And against the now-second place Brewers, no less.

Of course, the Brewers have lost eight in a row — which ties them for the longest losing streak in the majors this season. No streak goes on forever, and the Brewers will be back at home after a brutal 1-8 road trip. Still, the Cardinals have an excellent chance to make an impact on the division race with these next four games. Cliche alert: the Cards really do control their own destiny since they’re now in first place, and just 23 games remain.

With all the positives of late, does it make the team any easier to love than two weeks ago? They’re certainly easier to like when they’re doing well, that’s for sure — and I don’t mean that as some kind of front-runner statement. But Mike Matheny is still Mike Matheny and everything that’s led to this point of 2014 still happened. No matter the outcome of the season, this will never be one of my favorite Cardinals teams.

And we don’t know what these next 23 games will bring either. After five months that were so often filled with frustration, anything really still could happen.

Yet achieving expectations is always better than underachieving. And, as we learned years ago from Nuke LaLoosh, winning is, like, better than losing.