And four weeks, of course, is 28 days — which is an interesting number to look at in recent Cardinals history, since it hasn’t been used since 2011. So today is both Colby Rasmus and Octavio Dotel days until Opening Night at Wrigley Field.

Chances are we’re all thinking about Colby these past couple days, after the now-Astro played against the Cardinals on Friday and Rick Hummel wrote a very interesting profile on him in yesterday’s St. Louis Post-Dispatch. Reading it, I was actually glad things happened the way they did since, at age 28 (which is pretty much usually the prime of a player’s career, right?) Colby fully admits that “I haven’t got much more in me” when it comes to baseball.

Want a quick reminder of what things were like by about mid-July 2011? Check out this post from the AMF archives by Michael, as well as the multitude of comments.

And then, on July 27, Colby was traded to the Toronto Blue Jays, with the Cardinals receiving Edwin Jackson (via the White Sox), Marc Rzepczynski, Octavio Dotel and — remember this part? — Corey Patterson.

And, by the time October arrived, that 28 was having a little bit of fun — thanks to the Rally Squirrel. 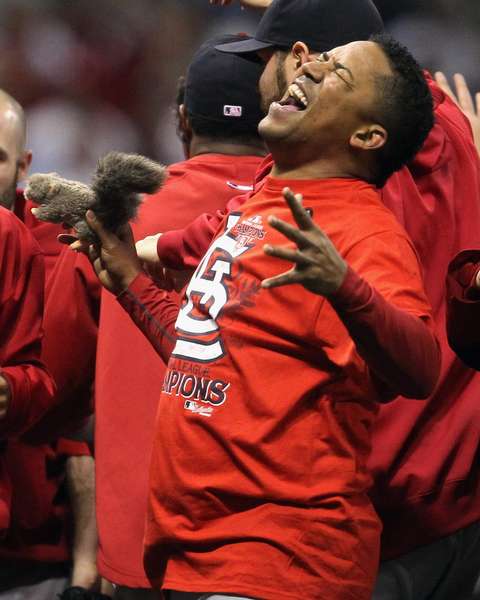 He was there after the Cardinals won the World Series …

And, in a way, during the World Series celebration a couple days later.

That hat was the best.

Can we say that the trade of 28s (and those other guys) was a benefit just for Dotel’s embracing of the Rally Squirrel alone and the entertainment that (and the Squirrel itself) provided?

But looking back at these pictures makes me realize again what a truly incredible run September and October 2011 were — with Octavio Dotel playing a key role in the bullpen.

2011 was certainly an interesting year for uniform No. 28 for the Cardinals.