Quick — when you hear No. 27 for the Cardinals, who’s your first thought?

Am I the only one who still thinks of Scott Rolen first? Sorry to Jhonny Peralta and to the never-forgotten second love of Miranda’s baseball life (after David Freese) Tyler Perry Greene and, apparently, Ron Villone (I’ve purged my memory of the 2007 and 2008 Cardinals, to be honest). But I still think of the third baseman from what’s my tied-for-first favorite Cards team, 2004. And now we’re just Scott Rolen days until Opening Night at Wrigley Field. 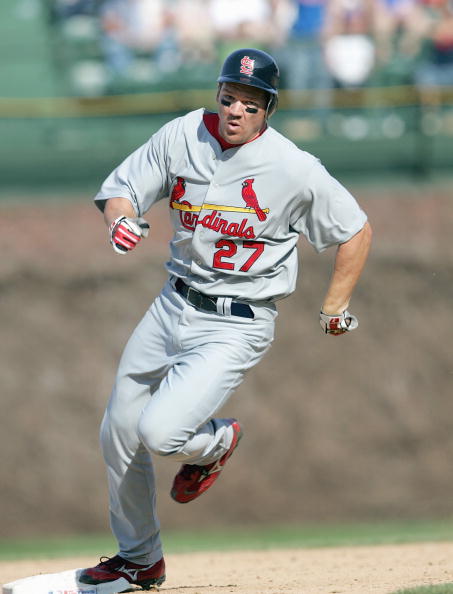 Ah, yes, 2004 … that wonderful year when the MV3 of Rolen, Albert Pujols and Jim Edmonds dominated; when Larry Walker was traded to the team in August; when Chris Carpenter showed why he was worth waiting through those shoulder surgeries for; when Jason Marquis, in his first season as a Cardinal, had yet to become the Guaranteed Loss Night pitcher and and won 15 games; when Matt Morris and CC joined Marquis with 15 wins each and Jeff Suppan had 16; when the team won 105 games; when they swept the Dodgers in the National League Division Series and both teams shook hands afterward (something we know would not ever happen with the current Dodgers and Cardinals); and when the season ended after that wonderful, seven-game National League Championship Series against the Astros.

Right? The Cards won the pennant, then lived happily ever after as NL champs.

Games One and Two of that NLCS are the only times so far I’ve attended Cards postseason games in person. Both were awesome, though not awesomely pitched, as the Cards won Game One 10-6 and Game Two 6-4.

Much of that offense came via home run. I despised Astros Carlos Beltran, who homered each night, and Lance Berkman, who homered in Game One, and would have laughed had you told me then how much I’d adore them in the future as Cardinals (especially LB). Yet I exulted in the Cardinals homers, which included one by Albert in Game One and four total in Game Two. The first was a two-run blast by Walker to score the Cards first runs, with the second coming two batters later by Rolen after Albert singled. Then the final two were the best: a tie-breaking homer by Albert to lead off the bottom of the eighth, followed immediately by one from Rolen. Being in the crazy crowd that night, even though it drizzled the entire game, was my best experience at Busch Stadium — especially that eighth inning.

Oh yeah, Rolen hit one more homer later in the 2004 NLCS. Maybe your remember it.

That little tap of his left foot while he’s batting, the way he always ran around the bases, the sound of the crowd, Tony La Russa not showing any emotion … ah, those Cardinals of the past. And what an incredible NLCS! (Have some time? Watch all of Game Seven on the MLB Classics YouTube channel.)