Who else could there be to represent 25 days until Opening Night at Wrigley Field? 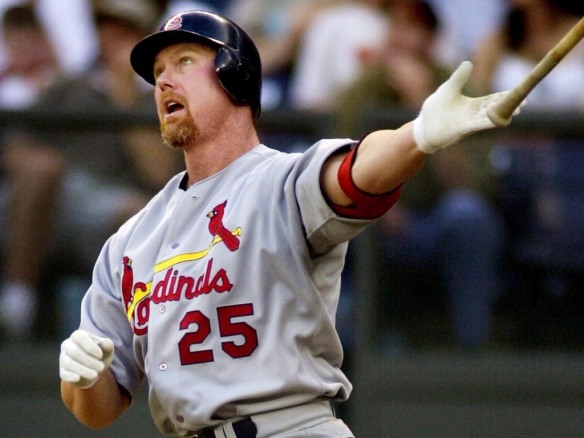 We all have varying opinions of Mark McGwire, 1998, steroids, a Congressional hearing, confessions and the like. But forget all of that for the moment — just think of how you felt in 1998, especially throughout September 1998.

As I’ve said many (probably too many) times before, I was initially a Cubs fan when I started following MLB in the 1980s. From January to June 1988 plus 8/8/88 and 8/9/88, I had an internship in the Cubs media relations office and, afterward, found myself a little burned out and disinterested in baseball.

The death of Harry Caray in February 1998 (I’d met him during my internship and talked with him before every home game that April through June plus the first unofficial night game on 8/8) made me remember how much I used to love baseball and how much I missed it. I tuned in to the Cubs home opener and slowly got hooked back into what was an exciting season for them — Kerry Wood’s debut in May, Sammy Sosa’s amazing 20-homer June, the Game 163 playoff against the Giants to determine the wild card, etc. Yet as Sammy’s home run total grew along with Mark McGwire’s and the story grew at the national level, I began reading more and more about Mark and started to find him appealing. There was an article in Sports Illustrated — by Rick Reilly, maybe? — that really did it.

As the summer went on and the homers for both Mark and Sammy piled up, even friends who weren’t baseball fans started paying attention due to the exposure the home run chase was receiving. A non-fan coworker was suddenly in love with Mark after seeing him on TV. She and I went to several Cards games in both Chicago and St. Louis from 1999 to 2001, and she rarely watched any part of the ballgame except Mark, almost always through binoculars — whether he was on the field or in the dugout. I still remember her joyful exclamation of “He just put drops in his eyes!”

Anyway, Cubs fan that I still was in September 1998, I had a front-row (via WGN) view of Mark’s historic 61st and 62nd homers since they came against my team. Both were awesome (in the true, awe-inspiring meaning of the word) and the response each game by the Cardinals fans went a long way toward helping persuade me to join their ranks. (Although I did think the Cubs players were terrific in their responses and congratulations to Mark during those games too.)

We all have our own individual opinions on what has transpired since 1998, as I mentioned above. And maybe your opinion has evolved over time, just like so many sports media members who gushed over and canonized Mark (and Sammy) for bringing the masses back to following baseball in 1998, but then later crucified both for daring to taint baseball by using steroids. That too is your, and everyone’s, right.

But here’s a trip back to that moment when Mark McGwire hit homer No. 62 on 9/8/98 and a reminder of what that night was really like.

(Yes, that is the voice of Chip Caray — who was the Cubs broadcaster at the time — with the repeated “He did it!” call on WGN. Can you tell Chip was born in St. Louis? I also found the entire WGN broadcast from that night online too, if you’re interested in reliving the entire game.)

Of course, Mark wasn’t done when he hit No. 62 (or 63, or 64 …) so, to conclude, here’s his final homer of that season, again to help you recall the sentiment and the specialness of that time.

And now just 25 days until Opening Night on April 5 at Wrigley Field.