The number is getting smaller as the countdown rolls on toward the Cardinals facing the Cubs at Wrigley Field on April 5 — and we’re down to the teens, with only 19 days to wait now.

And while there are more obvious choices for this number, like the current No. 19 in Jon Jay or even Tom Pagnozzi, I’m going a different route — back to the early 2000s-era Cardinals. 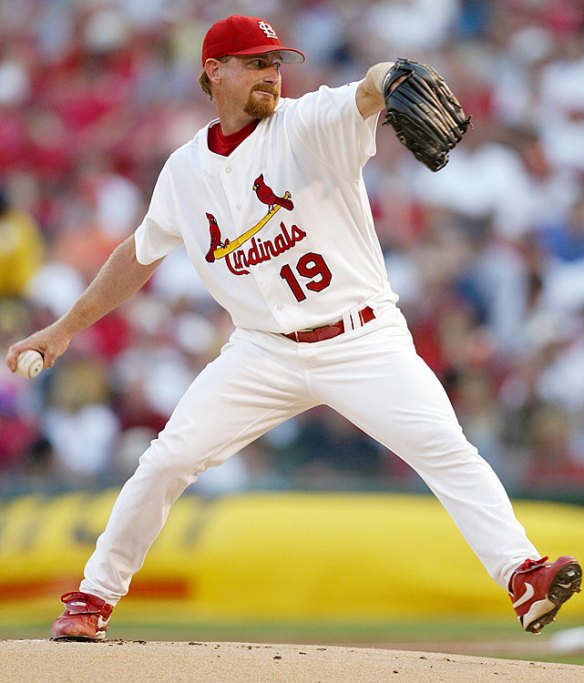 Ah, yes, Gregory Scott “Woody” Williams. The Cardinals acquired him from the Padres for Ray Lankford on Aug. 2, 2001, as a special birthday gift for both Daniel Shoptaw and me. And even though I didn’t know much about Woody at the time, I was excited when the Cards did acquire him — he was my age. (Yes, by my mid-30s, I developed a special fondness for those players as the number of them began dwindling. I was able to falsely feel young when my birth date twin, Tim Wakefield, pitched until he was/we were 45. Now I find myself alarmed at all the managers — including Mike Matheny — who are younger than me. But enough of my mid-life crisis …)

Woody was days from his 35th birthday when he joined the Cardinals that August and went on to have the best years of his 15-year big league career wearing the Birds on the Bat through 2004. During his Cardinal career he compiled a 45-22 record with a 3.53 ERA, plus was named to his only All-Star team (in 2003) and made his post-season debut in 2001. And that first appearance, in Game Two of the National League Division Series, was definitely one of his career highlights.

The Cards lost a very tough Game One by the score of 1-0 in the battle of Matt Morris vs. Curt Schilling and faced Randy Johnson in Game Two. Yet things were better right away, with Albert Pujols hitting a two-run homer in the top of the first to give Woody a lead when he took the mound at Bank One Ballpark. And he was more than up to the task of facing that year’s NL Cy Young Award winner, as he didn’t allow a hit until the fourth inning and allowed four overall and just one run in the bottom of the eighth inning while striking out nine. The Cardinals won 4-1.

I had the chance to see Woody pitch in person a couple of times, in August 2004 and again in Game One of the NLCS that year. That game was certainly no pitchers’ duel, as the Cards won 10-7 and Woody allowed four runs (including two in the first inning on a homer to — of course — Carlos Beltran) but it was certainly exciting to be there in person and see all that offense. Even Woody had a hit! And he was the winning pitcher too, which probably meant a little more.

Thanks, Woody, for the memories and your contributions as a Cardinal.