It’s rare that the last time a pitcher accomplished a feat was in the 1930s, but one of Dizzy Dean’s records still stands today. Dean was the last National League pitcher to win 30 games in a season, which he did in 1934 as part of the World Series winning Gashouse Gang 1934 Cardinals. 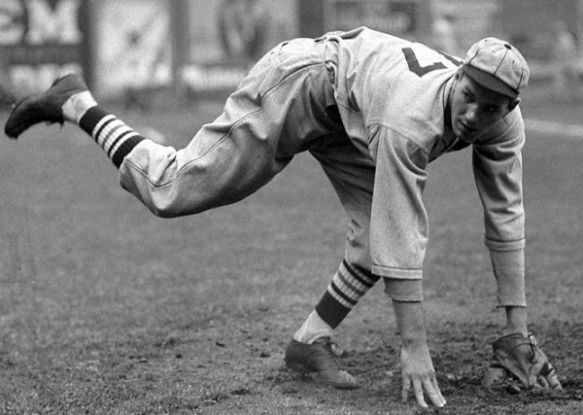 Much like later sports legends Joe Namath and Muhammad Ali, Dizzy liked to brag about his prowess and make public predictions. In 1934, Dizzy predicted, “Me an’ Paul are gonna win 45 games.” On September 21, Diz pitched no-hit ball for eight innings against the Brooklyn Dodgers, finishing with a three-hit shutout in the first game of a doubleheader, his 27th win of the season. Paul then threw a no-hitter in the nightcap, to win his 18th, matching the 45 that Diz had predicted. “Gee, Paul”, Diz was heard to say in the locker room afterward, “if I’d a-known you was gonna throw a no-hitter, I’d a-throw’ed one too!”

He also bet he could strike out Vince DiMaggio four times in one game. He struck him out his first three at-bats, but when DiMaggio hit a popup behind the plate at his fourth, Dean screamed at his catcher, “Drop it!, Drop it!” The catcher did and Dean fanned DiMaggio, winning the bet. Few in the press now doubted Diz’s boast, as he was also fond of saying, “It ain’t braggin’ if ya can back it up.”

Diz finished with 30 wins, the only NL pitcher to do so in the post-1920 live-ball era, and Paul finished with 19, for a total of 49. The Cards needed them all to edge the Giants for the pennant, setting up a matchup with the American League champion Detroit Tigers.

There’s a great post on Dizzy’s 30th win that’s well worth checking out by Mark Tomasik at RetroSimba.

Dizzy’s career was unfortunately cut short by injury. A line drive hit him on the foot during the 1937 All-Star Game and fractured his toe. (“Fractured, hell, the damn thing’s broken!“) He came back too soon, which altered his delivery and hurt his arm. Still …

By 1938, Dean’s arm was largely gone. Chicago Cubs scout Clarence “Pants” Rowland was tasked with the unenviable job of obeying owner P. K. Wrigley’s direct order to buy a washed-up Dizzy Dean’s contract at any cost. Rowland signed the ragged righty for $185,000, one of the most expensive loss-leader contracts in baseball history.

Dean was inducted into the St. Louis Sports Hall of Fame in 2010. Here’s the highlight video from that enshrinement.