There was a boy in the stands, tousled jet-black hair, wide-open dark eyes, mouth open, scarcely believing he’s watching his hero pitching against the Washington Nationals one week ago today. 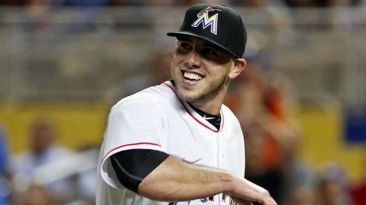 One kid, watching another kid tease back and forth with the umpires, one kid watching the other kid’s big smile visible from the farthest reaches of Marlins Park, competing with that garish contraption beyond the outfield fence for electric wattage.

The boy with his oversized jersey with his hero’s name across the back, the large 16 under it, cap that barely fits.

Oh, how we envy that boy, look at him, all energy, squirming, hopping around in his seat, slapping the little glove he brought in case a foul ball comes his way, he’s ready. The boy, he’s pointing and shouting at his dad with every strikeout from his hero. That boy, he’s going to grow up watching one of the finest pitchers to take the mound in the history of the sport. He’s going to be able to tell his grand kids about the tall, strong Cuban who played this hard game with such infectious passion.

Did you see what that boy saw? Twelve strikeouts in eight innings against a team a handful of days away from claiming a division title. That’s right, 12. His hero sliced through the Nationals lineup, and had FUN doing it. Did you see his hero in the top of the eighth, in a 1-0 game, with runners at first and third with two outs? Did you see his hero’s mom, on her feet, as the TV camera zoomed in, fanning herself in the excitement. That’s her nino, her hero who saved her in that oft-told story that’s reached the point of fable of the 15-year-old boy who saved her from hostile waters, saved her as they escaped for a better life in a country of dreams.

That’s Daniel Murphy at the plate, the Nationals’ MVP candidate. Does he get the 97-mph fastball from the boy’s hero? Nope. Nice little change outside. Broke Murphy’s bat. Easy ground ball. End of the inning. Even an MVP candidate is impotent tonight.

The boy is on his feet, hopping up and down. He’s pointing, he’s shouting.

Look at Jose Fernandez through his eyes.

And those eyes today are filled with tears.

Baseball is a hard game, played by hard men, they tell us, watched by boys who someday hope they’ll grow into one of those hard men.

Last night, those hard men turned back into boys.

Those hard men in the Marlins dugout saw Dee Gordon let the memories of his friend go, through the tears, as he lifted an unlikely home run to right field, the ball carried by the cheers of the Marlins Park crowd.

Did you think as you watched it that maybe there was something else, somebody else, holding up that home run ball, making sure it would land well beyond the wall? Me, too.

These aren’t the hard men we watch and root for. These are boys, we’re suddenly reminded, not far removed from the times they spent in front of the TV, in the stands, mouths open, squirming and pointing in their seats.

These aren’t the hard men celebrating a home run. They’re watching as Dee Gordon openly cried his way around the bases. They’re hugging each other. They’re carrying Dee Gordon, they’re showing the genuine love for their lost friend, as if they would have the chance to hug their teammate one last time.

The boy is watching that, too. He wraps his own small arms around himself. He wants to hug, too, but there’s no hero to hug.

Sometime in the future, when he grows into a man, and has his own son — or daughter — and will hold hands as the two walk into Marlins Park, or wherever his favorite team is now playing, he’ll look down as fresh, wide-open eyes see their heroes, young kids playing a hard game. He’ll see the game through their eyes. And he’ll remember his own hero. And his eyes may fill with tears again.

Show me a hero, and I’ll write you a tragedy. F. Scott Fitzgerald’s words.

No. Show us a tragedy, and we’ll write you about our hero.

1 thought on “Show Us a Tragedy, and We’ll Write You About Our Hero”