It’s been a fulfilling journey over these past several weeks to look back at what unfolded from late August 2011 through five years ago tonight, when the Cardinals won their 11th World Series championship.

The memories seem all the more sweet as time passes, because the fact they completed that journey gets more improbable all the time. One more loss at any time during the 2011 regular season or one more Braves win …

What a team, indeed.

Here’s a look at the recap from Oct. 29, 2011, capturing what happened five years ago tonight. 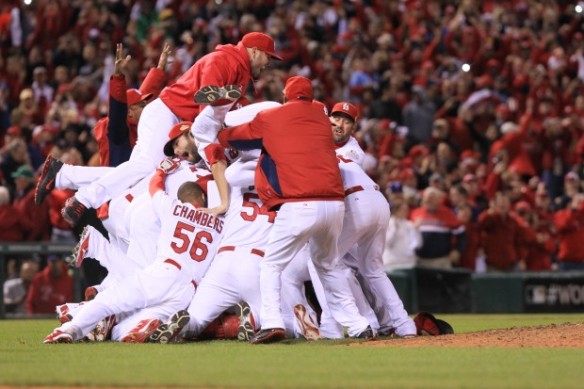 It’s often said that sports teach us lessons about life. And now, whenever we think something we want to achieve is too difficult or too much of a challenge, we have our motivation to keep going.

Less dramatically than in Game Six but even more fulfilling, the Cardinals won Game Seven of the World Series 6-2 to win the team’s 11th championship and culminate the amazing ride that began with a win over the Pittsburgh Pirates on Aug. 25.

We’re all so familiar with the details — 10 1/2 games back at that point, the “September to remember” push and Braves’ collapse that got them into the playoffs on the final day of the regular season, beating all the “supposed to win” teams throughout the NLDS, NLCS and now World Series …

They are details we will fondly recall and lovingly replay for years to come. Because they did it!

Against all the odds, ignoring everyone who said they couldn’t win and shouldn’t be there — none of that mattered. The Cardinals believed in themselves, even back in late August when many of the team’s fans quit believing in them.

And now, the ultimate reward.

And it came as a true team effort. Last night’s win was a good example of that — Chris Carpenter starting on three day’s rest for the second time ever, and having a rough first inning where he gave up two runs. The Cardinals bouncing back right away, with David Freese tying the game by driving in Albert Pujols and Lance Berkman. CC then settling in and being the intense competitor he is for five more innings. Allen Craig hitting a go-ahead homer to put the Cards up 3-2, scoring two more runs on a bases-loaded walk and bases-loaded hit by pitch, Yadi driving in the final run on an RBI-single. And the bullpen, overcoming the challenges of earlier in the Series and settling in — with veterans Arthur Rhodes and Octavio Dotel and kids Lance Lynn and Jason Motte all shutting down the Rangers.

And that was it — Cinderella story complete, a World Series winner!

An amazing moment, whether you were there in person or watching on TV or sharing the moment via phone with a loved one (as I had to, calling my nephew Drew to watch the ninth inning with him). A time to celebrate, absolutely — is there any greater joy than seeing the team you’re so devoted to as the last ones standing?

And especially this team, this season.

We’ll never forget them, even though we might overlook some of the frustration they caused us in May, June, July and August. They will be our favorites for years to come, every single one of them. (Yes, even Ryan Theriot. Especially Arthur Rhodes. And, of course, Lance Berkman.)

And they can be our motivation for always, whenever the going gets tough.

As Joe Buck said in calling the final out of the game, what a team! What a ride! The Cardinals are World Champions in 2011!