You can’t tell by the weather here, especially with remnants of Saturday’s 9.6-inch snowfall still stubbornly hanging on, and the date on the calendar is the earliest ever for the occasion, but today is it: Opening Day 2018. 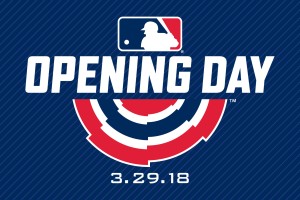 Then again, the sun is shining. Birds — and specifically cardinals — are chirping outside. Not that the weather in northwest Illinois has any bearing on what was supposed to happen at 15 Major League parks today: real games, ones that count, will be played. (Isn’t it shocking that weather in Detroit especially, but also Cincinnati, wouldn’t be conducive to baseball on March 29? Way to go, Mother Nature — or MLB schedule makers. The decision to have all teams start on the same day was a good one, but geography could have played a bigger role.)

Weather aside, Opening Day brings about an anticipation and excitement like nothing else. A marathon of six-plus months begins today, set to play itself out through these early spring days into the warmth of May and into the heat of summer through fall and the changing colors of the leaves that are just starting to bud on trees. Theoretically, with today’s blank slate and 162 games ahead, every team has a chance to succeed.

Realistically? Of course not. But even my Giants and White Sox fan friends are feeling good this morning (though my Giants fan friend was feeling better before Madison Bumgarner’s hand was fractured last week …)

As Cardinals fans, we have a lot to be excited about with so many new faces on the roster and in the coaching ranks. After two seasons of missing the playoffs, we need something to be excited about going into this season. Yes, of course, there’s plenty to wonder or worry about too — but let’s not get into all of that today. Trite as it sounds, Opening Day is literally a new beginning.

So just relax and enjoy the fact St. Louis Cardinals baseball is back. Adjust your life once again to keeping up with these 162 games. Know that you’ll be frustrated at times, of course — but also anticipate those times when you’ll be able to marvel at something unexpectedly great. There’s no telling what it will be.

(A glance back at my most recent posts here at AMF is a reminder Ozuna was obviously not my first choice of Marlin to acquire … but I am very glad he is here.)

It’s just a couple of hours now until those first pages of the Cardinals season begins. And there’s just one way to get yourself prepared …