There are so many topics that could be addressed about the St. Louis Cardinals after the first 10 or so days of the 2018 season, and so many are deja vu to 2017. But let’s ignore those right now. Instead, how about a bigger picture look at how some players are doing on their new teams?

And, specifically, how about a look at how the 2017 Miami Marlins outfielders are doing in their respective new homes …

We all remember quite well the Cardinals off-season pursuit of an impact bat that was missing last season, and the courting of Giancarlo Stanton. It was even enough to get me to write three posts about wanting to acquire him last October, November and December. (Ah, memories … especially that photo with my December entry.) Yet Giancarlo turned downed the Cardinals, and the Giants, and decided he wanted to be a Yankee. Okay, his right — that’s why he had the full no-trade clause.

So the Cards moved on, and acquired Marcell Ozuna instead. There were some Cardinals fans were who not pleased with that move and would have preferred the Cardinals acquire the third Marlins outfielder, Christian Yelich, instead.

I was reminded of all these things at various times yesterday — when I saw Ozuna single with one out in the bottom of the ninth yesterday, for one thing. When I heard that Yelich was put on the disabled list yesterday with an oblique injury. And particularly when I saw that, for the second time this week, Stanton struck out five times in a game at Yankee Stadium — and heard boos from the fans as well.

It made me wonder how, had he decided differently, the Busch Stadium crowd would respond to two five-K performances to start and end a home stand.

END_OF_DOCUMENT_TOKEN_TO_BE_REPLACED

You can’t tell by the weather here, especially with remnants of Saturday’s 9.6-inch snowfall still stubbornly hanging on, and the date on the calendar is the earliest ever for the occasion, but today is it: Opening Day 2018.

Then again, the sun is shining. Birds — and specifically cardinals — are chirping outside. Not that the weather in northwest Illinois has any bearing on what was supposed to happen at 15 Major League parks today: real games, ones that count, will be played. (Isn’t it shocking that weather in Detroit especially, but also Cincinnati, wouldn’t be conducive to baseball on March 29? Way to go, Mother Nature — or MLB schedule makers. The decision to have all teams start on the same day was a good one, but geography could have played a bigger role.)

Weather aside, Opening Day brings about an anticipation and excitement like nothing else. A marathon of six-plus months begins today, set to play itself out through these early spring days into the warmth of May and into the heat of summer through fall and the changing colors of the leaves that are just starting to bud on trees. Theoretically, with today’s blank slate and 162 games ahead, every team has a chance to succeed.

Realistically? Of course not. But even my Giants and White Sox fan friends are feeling good this morning (though my Giants fan friend was feeling better before Madison Bumgarner’s hand was fractured last week …)

As Cardinals fans, we have a lot to be excited about with so many new faces on the roster and in the coaching ranks. After two seasons of missing the playoffs, we need something to be excited about going into this season. Yes, of course, there’s plenty to wonder or worry about too — but let’s not get into all of that today. Trite as it sounds, Opening Day is literally a new beginning.

END_OF_DOCUMENT_TOKEN_TO_BE_REPLACED

(With apologies/thanks to Mariah Carey and to my niece Samantha, who played this song over and over in my car on Saturday) 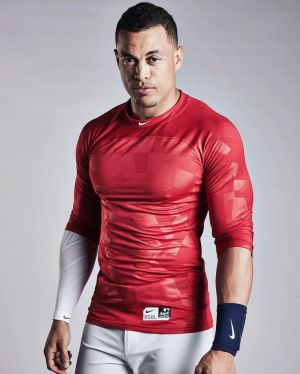 Dear Giancarlo,
My goodness, I’ve been reading a lot about you lately … and I’ll just say that I’d like to dedicate this song to you as you make decisions about your future. And, if this photo is any indication, red is definitely your color. I hope to see you in St. Louis on April 5 — I’ll be wearing my soon-to-be-purchased (fingers crossed …) Cardinals Stanton jersey.

All I Want For Christmas Is You, Giancarlo Stanton — As A Cardinal

I don’t want a lot for Christmas.
There is just one thing I need: an impact bat for my team.
I don’t care about the presents
Underneath the Christmas tree.
I just want you for my team’s own
More than you could ever know.
Make my wish come true!
All I want for Christmas is you — as a Cardinal.

END_OF_DOCUMENT_TOKEN_TO_BE_REPLACED

Happy Thanksgiving! I could be really cheesy and say something about how thankful I’d be if you’d become a Cardinal, but I won’t. I mean, I would be very grateful if everything works out — but I’m not going to be silly about it.

Anyway, congratulations on being the National League Most Valuable Player as well! And on your tremendous 2017 season. I actually watched your games quite a bit in the second half of the season, especially toward the end of September, and you guys were fun to watch at times — and the MVP award was well deserved.

Yes, my interest in the Cardinals definitely waned even further in 2017 — especially as September went along. Which is why one of the rare things I’ve written here this year was about being on board with the Cardinals trading for you, all the way back on Oct. 6. Everything I wrote nearly seven weeks ago is all still true. And, since the World Series ended and the hype machine about you being traded ramped up even more, you’ve been the most popular topic of baseball conversations I’ve had. As in, you’ve mostly been the only topic among my baseball pals at work — who are a Giants fan and two White Sox fans. And a non-baseball fan who sits by the Giants fan and now knows who you are too.