Setting: Coors Field in Denver, a game between the St. Louis Cardinals and Colorado Rockies. It’s the bottom of the fourth inning and two Cardinals meet up in the outfield.

PB: Yeah, thought maybe I could get it. Dude, it’s crazy the way the ball carries here.

AC: You learn that the more you play here. Kind of.

PB: Right, but you have to play to learn.

END_OF_DOCUMENT_TOKEN_TO_BE_REPLACED

With all the angst among Cardinals fans following Sunday’s game and the news Jaime Garcia and Michael Wacha were both going on the disabled list, safe to say we were hoping to see something positive from the team on Monday night as they faced the Colorado Rockies.

Another dominant outing from Lance Lynn combined with another tremendous performance at the plate from Matt Adams gave the Cardinals a 8-0 victory over the slumping Rockies. (They’ve now lost seven in a row and are 3-7 in their last 10 games.)

Just to remind us this is a game from the 2014 Cardinals, though, they scored those eight runs on just six hits. Five walks and two hit batters provided the additional base runners. Matt Carpenter, for example, scored two runs despite the fact he was 0 for two — he was walked twice and hit once.

The other Matts had successful nights as well — the change to move Holliday up to second and bat Adams third is starting to pay dividends. Holliday drove in the Cards first run with a third-inning double plus singled in the ninth. And all three Matts were involved when Adams singled in the third, as the other two scored.

Adams, of course, had the biggest night of all. In addition to that two-RBI single, Big Nickname had two homers — a solo blast in the fifth and a three-run bomb in the seventh with Lynn (who walked) and Carpenter (hit by pitch) on base. Three for five with two homers and six RBI. Just the kind of game we’re coming to expect from him, right? Lately, at least. Since returning from the disabled list on June 13, he’s only hit .342 with a double, a triple, five homers, 14 RBI and a ridiculous OPS of 1.157.

Oh, and he has two more games ahead at Coors Field.

END_OF_DOCUMENT_TOKEN_TO_BE_REPLACED

With just nine regular season games left and only a one-game lead in the National League Central, we Cardinals fans don’t need a cause for concern. Yet after yesterday’s 15-inning loss to the Rockies — with Trevor Rosenthal and Edward Mujica giving up tying runs in the eighth and ninth innings — do we need to worry about them? 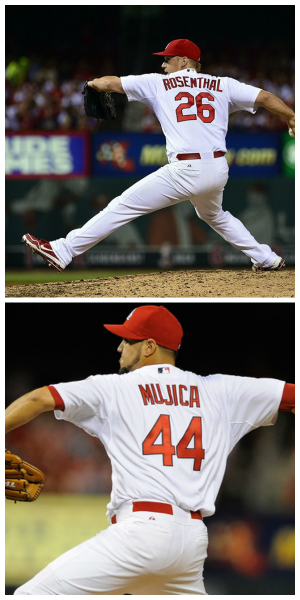 Looking at their stats for September, the ERAs for both certainly jump out: 5.00 for Rosenthal and 7.11 for Mujica.Then again, as relievers, those are based on small sample sizes.

The 5 earned runs allowed by Rosenthal in 9 innings pitched this month all came in this Colorado series, with 4 in Monday night’s loss. He’s only allowed 5 hits (also all in Colorado) during those 9 innings, and struck out 14. Opponents are hitting just .161 against him.

Then there’s Mujica. In his 6.1 innings pitched during September, he’s allowed 5 earned runs on 12 hits (including 2 home runs). He has 2 saves. And do you think the opposing team likes seeing him enter the game? They’re hitting .462 off him this month.

As the season has gone on, I’ve noticed more and more fans wanting Matheny to replace Mujica as closer — with Rosenthal. While it’s easy to agree with replacing Mujica, would Rosenthal really be a smart option?

END_OF_DOCUMENT_TOKEN_TO_BE_REPLACED

If you’re like me, the Cardinals aren’t the only team you’re watching now. With the National League Central race so close and the standings fluctuating daily, my nightly baseball watching has expanded this month since I need to know what the Pirates and the Reds are doing every game too.

The Cardinals still have my primary attention, of course, and the prime viewing spot on my television. But here’s a picture to show you just how I’ve been watching — with the Pirates game on MLB-TV, sound muted. The Reds game, depending on who they are playing, is either on Gameday on my laptop (like last week when they played the Cubs and Brewers, since I’m in their home market and blacked out on MLB-TV) or on a split-screen with the Pirates.

But it’s September — what else can we do? Besides find ourselves doing the unlikely and rooting for the Cubs and Brewers and Astros to win, anyway.

It’s an emotional roller coaster at times — last night being a prime example.

And it gets us ready for what’s ahead in October, on a slightly less intense level.

Back to last night …

END_OF_DOCUMENT_TOKEN_TO_BE_REPLACED

When the Cardinals score 11 runs, there are certainly plenty of moments to highlight. It’s even better when they snatch first place back in the process. Last night’s win provided both.

Since it was Joe Kelly Day, let’s start there. 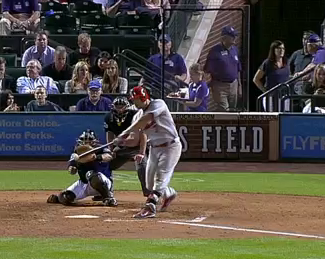 Holliday blasts a 2-run homer and his 4th hit of the night in an 11-4 Cardinals win.

Kelly certainly didn’t look phased by the loss in his last outing against the Brewers. Or, perhaps, he was simply comfortable with the task at hand — getting the Cardinals a much-needed win after dropping game one in Colorado and only scoring two runs in the process.

Through five innings, he kept the Rockies scoreless, giving up just three hits and two walks. The downside? He left after five with what he later described as tightness in his right calf and knee that has been “feeling weird” as of late. After a rather lengthy discussion at the mound with Yadier Molina, Mike Matheny, and a trainer, he continued throwing with two outs in the inning. A couple of mind-90s pitches later, and he was eligible for the win. So, there was that. END_OF_DOCUMENT_TOKEN_TO_BE_REPLACED