I’m not going to join in the fray over what Adam Wainwright said or did — frankly, I’d rather dedicate this song to Adam Wainwright instead — although I do want to talk about Derek Jeter’s first at-bat against him.

Yes, it was all choreographed to perfection beginning with the “RE2PECT” commercial running on FOX once the top of the first inning ended. Then, at Target Field, having the introduction of Jeter by the late Bob Sheppard was a wonderful touch. The standing ovation from the fans, the tipping of his helmet to the crowd, the requisite camera shots of Jeter’s parents in the stands, the applause by the all the National League starters on the field, the silence on the FOX broadcast so we could all absorb the moment, even the chance to hear Jeter telling Jonathan Lucroy “have a good one and congratulations to you, all right?” as the crowd begins to chant “Der-ek Je-ter” — top notch, of course, because that’s the way it was all supposed to be.

The first pitch from Wainwright, still silence from Joe Buck and the crew, the crowd settles down. Another requisite shot of Jeter’s family and then, through the silence, one man’s voice rings out …

END_OF_DOCUMENT_TOKEN_TO_BE_REPLACED

So, here we are at last — the New York Yankees return to St. Louis for their first-ever games at Busch Stadium III (even though it’s rarely referred to as Busch III anymore since this is the ninth season the Cardinals have been playing there). Which means The Derek Jeter Final Season Tour also is making its latest stop. 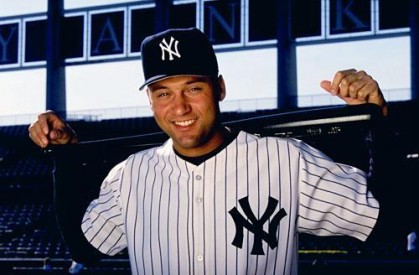 As you’ve no doubt heard, time and time again, this is Jeter’s final season. And you’ve likely heard as well about the gifts every team has showered upon him as a result.

Why they have to do that, I’m not exactly sure. Yes, he’s a great baseball player (and, honestly, I do like him). But, for the second straight year, a Yankee has conveniently announced before a season begins that this will be his last season before retiring and thus every team on the Yankees schedule has been forced to produce A Farewell Ceremony Filled With Useless Gifts That The Guy Doesn’t Need Nor Likely Want But They’re Required To Do Something Anyway.

(In case you’re not up on what Jeter has received thus far, here’s a handy link to a photo catalog of retirement gifts Jeter has received to date, courtesy of Newsday. Or if you’re like me and the words “Derek Jeter” and “gifts” reminds you of something else newsworthy from the recent past, here’s a link to what shows up on that Google search.)

Now, today, it’s the Cardinals’ turn for the retirement ceremony.

And I don’t get why. END_OF_DOCUMENT_TOKEN_TO_BE_REPLACED