Ah, Game 162! That epic final night of the 2011 regular season, when the triumphant comeback of the Cardinals and monumental collapse of the Braves was complete, yet was just one part of a fantastic evening. (Though obviously the part we as Cards fans cared about the most.)

Experience again MLB’s highs and lows from the evening here (it’s worth the 12 minutes, especially to see bits of Chris Carpenter’s performance — plus isn’t it always nice to see the Red Sox complete their collapse? And the Braves as well?). Then continue on below to read what was published here five years ago about Game 162, which made the “September to remember” complete. That final sentence is rather prescient in retrospect, if I do say so myself. (OK, only because we know the final fairy-tale ending. Still …)

The comeback climb is finished, and in the best way possible — the Cardinals are the Wild Card Champions! 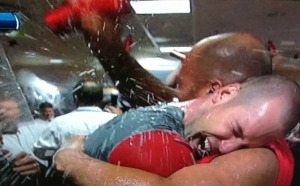 Carp, Albert and an epic hug

The the winning began, with that 8-4 Social Media Night victory over the Pirates. The winning continued. And now, history.

Making the playoffs after trailing by 10 1/2 after 130 games is, according to Fox Sports Midwest, the biggest comeback in history. No. 2 on the list? The 2011 Tampa Bay Rays, who are the AL Wild Cards Champs following their own stunning win in Game 162. At one point they’d been 9 games back. Third on the list? The 1964 Cardinals, who trailed by 8 1/2 games before propelling themselves to the National League pennant.

The Cardinals’ win was achieved without any of the tension or drama of Tuesday night. They took command from the very beginning, with five straight hits to open the game. Albert drove in the first run for RBI No.99, and the scoring continued until Nick Punto drove in run No. 5. Chris Carpenter came to bat before even taking the pitchers mound — always a good sign.

END_OF_DOCUMENT_TOKEN_TO_BE_REPLACED

National League Central: not yet clinched. The opportunity was there for the Cardinals to do so last night, following the Reds walk-off grand slam victory over the Pirates yesterday afternoon. Yet Mark Trumbo’s three-run homer that gave the Diamondbacks a 5-2 lead over the Cards in the seventh inning last night was the difference in the game.

Do we root for Johnny Cueto, who’s starting this afternoon against the Pirates and going for win No. 20, in the game that begins at 12:10 p.m. Central Time? 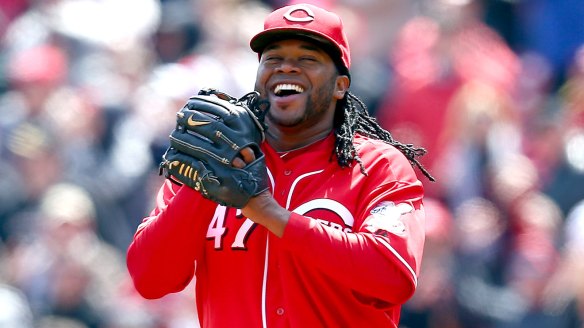 Yes, Cueto certainly is laughing at the idea that the Cardinals and Cards fans are wanting him to succeed today …

Or do we, as we’ve done since 2010 anyway, ignore and/or wish the worst for Johnny Cueto because he is Johnny Cueto and just know that Adam Wainwright will get the job done anyway when the Cardinals take on the Diamondbacks at 3:10 p.m. Central Time? END_OF_DOCUMENT_TOKEN_TO_BE_REPLACED