Apparently, the Brewers did their homework since the last time they faced the Cardinals. Of course, things have changed quite a bit for the Redbirds since then, too. 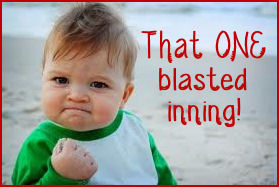 Lance “First Half” Lynn is tending toward the late-season struggles we hoped were a thing of the past. Jake Westbrook can’t seem to hold it together. Michael Wacha hasn’t been the rotation savior we’d hoped for. Neither has Carlos Martinez. Even Shelby Miller has shown signs of vulnerability after taking that line drive off his elbow a few weeks back.

And, the Brewers are the least of this rotation’s concerns over the next few weeks.

Last night, many will argue, was not really Lynn’s fault. A litany of innocent singles and a few less-than-stellar defensive plays quickly turned a 3-0 Cardinals lead into a 5-3 hole.

But, he had good stuff! They were only singles! Twice a double play could have/should have/would have been made if that slouch David Freese wasn’t manning third! END_OF_DOCUMENT_TOKEN_TO_BE_REPLACED