It was 70 years ago today that Albert “Red” Schoendienst began his remarkable career in Major League Baseball. The St. Louis Cardinals are marking the milestone by honoring Red with a special pre-game ceremony prior to tonight’s game against the Reds.

In addition, the team is launching a season-long campaign encouraging fans to demonstrate their affection for Red by sharing a video message via social media using the hashtag #LoveRed2.

“We want to mark this amazing milestone by letting Red know how much he means to the entire Cardinals family,” said Bill DeWitt III, President of the St. Louis Cardinals. “We encourage fans to join us in showing their affinity, affection and appreciation for No. 2 as he celebrates 70 years and counting in Major League Baseball.”

The team is asking fans to join Cardinals players, broadcasters and team officials in taping video messages where they say their name while announcing that they love Red too. Share your video on Twitter, Instagram, Facebook, YouTube or Vine using the hashtag #LoveRed2. More information is at cardinals.com/lovered2.

Tonight Red, who will be joined by his family, will be honored with a special ceremony at 7 p.m. He and fans will enjoy congratulatory video messages from players throughout the game and the team will wear a commemorative No. 2 “70 Years in Uniform and Counting” patch on their sleeves.

Red made his Major League Baseball debut on April 17, 1945, when the Cardinals played the Cubs at Wrigley Field. The young man from Germantown, Ill., joined the team to fill in for left fielder Stan Musial, who was serving in the U.S. Navy. That game, Red went 1 for 4 with a triple and run scored.

END_OF_DOCUMENT_TOKEN_TO_BE_REPLACED

The Grapefruit League is finished, and the regular season is now only two days away. Yes, the day after tomorrow — or really the evening after tomorrow night — the Cardinals and Adam Wainwright will face the Cubs and Jon Lester on ESPN Sunday Night Baseball.

The No. 2 , obviously, signifies just one Cardinal: Red Schoendienst.

Yes, the Hall of Famer and beloved Cardinal has been in baseball for 70-plus years now, with the great majority of those as a Cards player, coach, manager and special assistant to the general manager. He was elected to the Hall of Fame in 1989, his No. 2 was retired in 1996 and he was part of the inaugural class in the Cardinals Hall of Fame last year.

He was, however, not exclusively a Cardinal. Red was traded to the New York Giants in June 1956, and then by the Giants to the Milwaukee Braves in June 1957. The Braves won the World Series that season, beating the Yankees, then lost the Series to the Yankees the following year.

During the 1958-1959 off-season, Red was diagnosed with tuberculosis and underwent surgery to remove a portion of a lung in February 1959. He was told he would never play again, yet returned for five games late in 1959 and played in 1960 (making the cover of Sports Illustrated in June, in a truly awesome photo).

Next week, Red will be recognized for those contributions as a Brave when he becomes the 14th member of the Milwaukee Braves Honor Roll during a ceremony at Miller Park. The Brewers announced the news on Wednesday. END_OF_DOCUMENT_TOKEN_TO_BE_REPLACED

Feb. 2 is always an important day. Yes, of course, it’s Groundhog Day, but after dealing with the 13 1/2 inches of snow that fell in my hometown yesterday, I don’t think spring is on the way anytime soon.

More importantly, Feb. 2 is the birthday of Red Schoendienst — today he turns 92 and been involved in baseball for more than 70 years, and of course nearly all with the St. Louis Cardinals.

How much of Cardinals history has he been part of? As this from the SABR Baseball Biography Project puts it:

On October 28, 2011, the St. Louis Cardinals won their 11th World Series championship. Among those celebrating with the team was 88-year-old Red Schoendienst, who had first tasted World Series victory as a young second baseman for the Cardinals in 1946.

Sixty-five years after he savored his first World Series win, Schoendienst was still an integral part of the Cardinals organization. Officially listed as Special Assistant to the General Manager, at heart he was still a coach, donning a uniform for pregame practice at home games, at which he routinely hit fungoes to infielders.

Learning about Red and his expansive history with the team is one of the best parts about becoming a Cardinals fan. Who doesn’t love seeing him in his uniform with his No. 2 on the back, or in his red Hall of Fame blazer on Opening Day?

END_OF_DOCUMENT_TOKEN_TO_BE_REPLACED

Umbrellas and raindrops were key parts of yesterday’s home opener but, thankfully, the rain wasn’t enough to delay the game. And the St. Louis Cardinals offense apparently likes being home, as the Cards scored five runs on nine hits to triumph over the Cincinnati Reds 5-3 in damp and drizzly home opening game.

Seven Cardinals had hits in the game — Peter Bourjos had two! — and Yadier Molina showed once again how much he loves driving in runs against the Reds with a three-run first inning double. While Trevor Rosenthal had an uncharacteristic ninth inning, it wasn’t as wild as past home opener adventures in recent years and the Cards won their first opening game at Busch since 2010. Maybe Trevor just wanted to keep us interested …

And while the photo below shows a little bit of that gray and rainy atmosphere, the bunting was out and the Opening Day logo was on the scoreboard and the field — therefore, it was a beautiful day at Busch Stadium.

Here’s a look at the good, better and best of the festivities and the game, and special thanks to Laura for the photos she provided.

Leading off the parade of Hall of Famers was the newest of them all, former manager Tony La Russa wearing his red blazer for the first time. He looked good, and did a nice job greeting his fellow Hall of Famers, Mike Matheny, the coaches and the players as the first one in the home plate receiving line. He and Ozzie Smith even had a polite moment as they shook each others’ hands. And, as Dan McLaughlin and Ricky Horton pointed out on television and which I also noticed when watching, TLR even steered Pat Neshek in the right direction when he was going to walk behind everyone.

END_OF_DOCUMENT_TOKEN_TO_BE_REPLACED

Ah, Opening Day. Just hearing those magical words brightens your spirit, right? Only 33 more days until Cardinals baseball officially begins for 2014, and only 40 days until the real Opening Day, the Cards home opener. 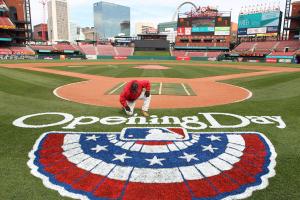 A friend has joked for years that Opening Day should be a holiday, which I absolutely agree with — especially since I usually take the day off anyway (actually, days, since the Cards seems to open on the road far too often in recent years). And now Ozzie Smith and Budweiser are leading a charge to officially make it so.

Just read the description for the petition to the White House and tell me this doesn’t get you even more excited for baseball after this long, dreadful winter:

MLB Opening Day is more than just the beginning of the season. It’s a symbol of rebirth. The coming of spring. The return of America’s national pastime. It’s a state of mind where anything is possible. You can feel the electricity in the air. Opening Day brings with it the promise of a new beginning. Every fan is in good spirits. It’s a day of celebration. It’s a day of hope. It’s a day that, for generations, has been looked forward to by baseball fans every off-season. It’s an American tradition, and it deserves to be recognized as an American holiday. Join us in our quest to make sure every American can exercise their inalienable right to celebrate the day those two magical words are uttered for the first time: “PLAY BALL!”

Poetry on its own, right? You can sign the petition here, as 100,000 signatures are needed for it to move forward and I was No. 20,996. (Never mind the logistics of what Opening Day would be the holiday, with games in Australia this year and on Sunday Night Baseball. It will all work out.)

Yet, with today being Wednesday, more poetry is needed …

Despite confusion
Of when Opening Day is
Baseball is our right.

Those magical words
“Play ball!” make all good once again.
A holiday? Yes!

END_OF_DOCUMENT_TOKEN_TO_BE_REPLACED

Quick, who was the winning pitcher for the Cardinals in Game Six of the 2011 World Series?

Yes, it was Jake Westbrook.

And just like the other sometimes forgotten hero of that game, Westbrook too has now retired. He leaves with a 105-103 career record and 4.32 ERA, with his numbers during his four seasons as a Cardinal pretty similar: 36-32 with a 4.27 ERA.

Yet he did have some highlights as a Card.

END_OF_DOCUMENT_TOKEN_TO_BE_REPLACED

Not many major leaguers have a 19-year playing career that includes being a 10-time All-Star. Not many managers lead the same team for 12 straight years, let alone to back-to-back National League pennants and one World Series championship. Even fewer have been involved in baseball for more than 70 years. 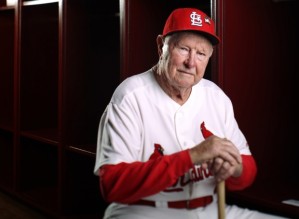 In fact, there’s just one man who has done all of the above — and nearly all of it while wearing Cardinal red.

Or perhaps that should be Cardinal Red, given that man is Red Schoendienst, who today celebrates his 91st birthday.

It’s good to see that the United Cardinal Bloggers are paying tribute to Red with our monthly project today. He’s been such a part of the Cardinals for so very long now, and deserves the recognition and tributes. In the three-year history of Aaron Miles’ Fastball, I’ve enjoyed honoring him on his birthday each year.

And in case you don’t know much about Red beyond starring in perhaps the greatest Cardinals commercial ever, read on for what I wrote two years ago. And take a look at Red through the years in my post from last year.