Ah, Monday, Monday … Rarely anyone’s favorite day, although it will be a good Monday three weeks from now, with the Cardinals home opener at Busch Stadium. But that’s jumping ahead.

Right now, it’s only 13 days until the beginning of the 2015 Cardinals season on ESPN’s Sunday Night Baseball against the Cubs at Wrigley Field. Is 13 a lucky number, or an unlucky one? Your view might just depend on the circumstance.

For me, my first trip to the current Busch Stadium in April 2006 involved that year’s No. 13. And it was both unlucky and, I suppose, lucky.

I was lucky enough (in a weird way) to see the No. 13, Sidney Ponson, get his first victory as a Cardinal on April 15, 2006. (It was not his only Cardinal victory, though I had to check Baseball Reference to be sure.) And to see Scott Spiezio (featured 13 days ago, coincidentally) hit his first Cardinals home run. (Back to Baseball Reference, which tells me it was off a Reds reliever named Mike Burns. OK, I’ll believe them.) 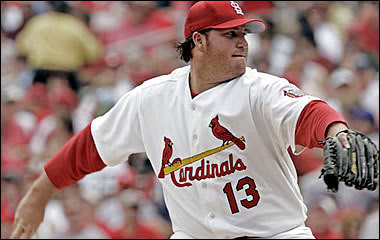 It definitely was a fun game, as the Cardinals had 11 hits and scored nine runs and beat the Reds 9-3. So Taguchi doubled! Hector Luna hit a homer! Ponson had a quality start! Who cares that we didn’t have the best seats — way, way in the upper deck down the right field line with a great view of the foul pole? At least we were in Busch Stadium III during the first-ever homestand.

And so what if — now the unlucky part — I’d just missed out on seeing Chris Carpenter pitch in a 1-0 game by about 18 hours? END_OF_DOCUMENT_TOKEN_TO_BE_REPLACED

Sure, it would have been simple (and obvious) to spotlight either of the most recent Cardinals to wear 26 today, as we’re now that many days until the Cardinals take on the Cubs at Wrigley Field on April 5. I could have written hundreds of words on Trevor Rosenthal (more than I have, anyway) or Kyle Lohse, but I’m always a sucker for good stories.

And what’s a more iconic baseball story than one about a father and a son — especially a father and son winning World Series championships for the same team?

Neither Ed Spiezio, No. 26 for the Cardinals from 1964 to 1968, nor Scott Spiezio, who wore his dad’s number as a Cardinal in 2006-2007, was a star player. Ed only played in 132 games total in his Cards career, with 281 plate appearances and one World Series at-bat in 1967 and one in 1968. Scott played in 201 games, and did very well in the 2006 NLCS — hitting a game-tying triple in Game Two at Shea Stadium before So Taguchi won the game with a homer off Billy Wagner. And probably the less said about the ending of Scott’s Cardinals (and baseball) career, the better. (Let’s hope this encouraging story from last May is still holding true today.) END_OF_DOCUMENT_TOKEN_TO_BE_REPLACED

When you think back to the 2006 NLCS between the Cardinals and the Mets, chances are you recall Game Seven. Which makes sense, as it was a tremendous and intense game — to stroll down memory lane: the Mets took a 1-0 first inning lead, the Cardinals tied it in the second, the score remained 1-1 until the ninth inning although the Cards would have taken the lead if not for Endy Chavez catching Scott Rolen’s homer. The ninth inning was epic just in itself as Yadi homered after Rolen singled to definitely put the Cards on top 3-1, then rookie closer Adam Wainwright gave up two singles and a two-out walk to load the bases before Carlos Beltran stepped to the plate and Waiwright threw just three more pitches …

Game Seven’s majesty wouldn’t have happened, however, without So Taguchi’s heroics six days earlier in Game Two at Shea Stadium.

After winning Game One, the Mets took a 3-0 first inning lead thanks to a rough night from Chris Carpenter — he gave up five earned runs and walked four in five innings pitched. The Mets led 6-4 in the seventh inning and David Eckstein and Chris Duncan quickly grounded out and flied out to start the inning. That Guy Who Used to Play First Base then singled and Jim Edmonds walked, bringing up Scott Spiezio and his little red facial hair thing — starting at third base for the game instead of Scott Rolen. The Speez launched it very deep to right, off the top of the wall, and ended up at third with a game-tying triple.

The game remained tied 6-6 until Taguchi, who entered the game as a defensive replacement for Duncan in the eighth, stepped to the plate. He was facing Mets closer Billy Wagner, who had 40 saves during the 2006 regular season. And Taguchi had two homers during 2006 (although he hit one in Game Three of the 2006 NLDS, his only at-bat of that postseason thus far). The count went full. And then …