How many ways can you say “The Cardinals are good at baseball?” Because I’m starting to feel like a broken record (it’s my favorite record, though!).

The Cardinals welcomed the Phillies to town last night. The Phills may be a little battered this season, but there are no small victories when the slimmest of margins separates the Cardinals from the rest. This was also the perfect way to see how rookie Shelby Miller would react to some extra time off. 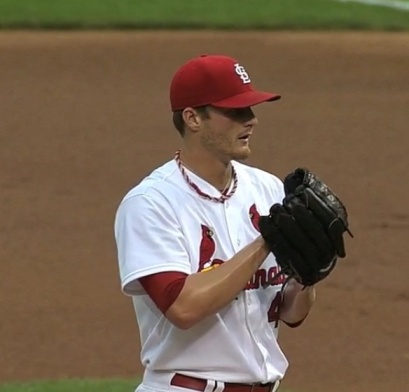 Shelby was back to the Shelby who wowed us early this summer. He confused and frustrated the visiting hitters, throwing down a three-hit shutout through six innings of work, striking out six and walking just one for his 10th win of the year.

Let the doubters doubt. Miller wants that Rookie of the Year award.

Mike Matheny is (or at least was last night) being a bit more careful about how long his young star pitches. Shelby faced 21 batters and threw 85 pitches, but was suddenly bothered by a cramp in his right calf. Not willing to take any chances, Miller then was relived by Randy Choate, then Seth Maness, followed by Trevor Rosenthal, and Edward Mujica. END_OF_DOCUMENT_TOKEN_TO_BE_REPLACED