The Cards have a load of depth on their roster and it’s not just limited to the pitching staff. 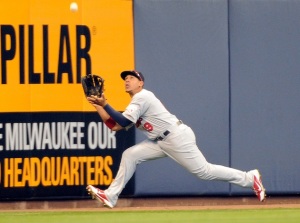 Coming into camp, the Birds have an outfield full of possibility.  The Oscar Taveras watch begins this month and younger guns like Stephen Piscotty(coming off a white hot Winter league session) and James Ramsey aren’t too far off the M.L.B. radar.  The area with the most intrigue is center field, with newcomer Peter Bourjos and returning player Jon Jay.

Some people think Jay will be taking over the spot by the end of April because he can hit and provide adequate defense.  Others think Bourjos offers you the better defensive ability that can give a fine bump to an outfield that ranked near the bottom in the majors in 2013.  Each offer you something different.  Let’s break them down individually first.

Jay does have the better bat and showed that over the course of 2010-2013, hitting .300 in two seasons and playing a fine centerfield after the departure of Colby Rasmus.  He filled a gap for a relatively low price and has a good history with this team and working relationship with the coaches.  While his bat slowed down in 2013, he still hit .276 with 151 hits, 67 RBI and a .351 on base percentage.  A lot of Cardinals fans, including myself at times, forget that 2013 wasn’t a horrible year at the plate for Jay.  His defense did erode last season, and that is where Bourjos comes into play.  Jay had problems covering the gaps and has never had a great arm.  However, his bat will get him plenty of starts in 2014.

Bourjos is an amazing defensive outfielder and can make the highlight reel with his catches.  His arm is decent and his range is very good.   The biggest question mark with Bourjos is his bat and his health.  His only 130 + game season came in 2011, and the other seasons have seen him take injuries to his upper body and lower body.  Bourjos played 50 + in 2010 when he came up to the Los Angeles Angels and only got 55 games in last year.  He has never hit for an amazing average, with a lifetime mark of .251 and an even worse on base percentage of .306.  He has stolen 41 bags in 54 attempts in his short career.  His biggest feature easily comes from his defense and that sets up the main question.