You might still be adjusting to the fact it’s Oct. 15 and the Cardinals postseason has ended, and it’s possible you’re having to deal with fans — real or very recent — of the team that beat them to advance to the National League Championship Series. Whether you’re looking for a way to feel better or ammunition to quiet those Cubs fans, here’s what the Cardinals have done in the postseason since the last time Chicago’s North Side team made it this far in the playoffs.

(Depending on how recent and how knowledgeable any new Cubbie fans around you are, it’s possible you’ll have to explain to them that the Cubs have been to the playoffs since 1908, and they did win the NLDS in 2003 also. Oh, and they won the NL Central and made it to the playoffs in 2007 and 2008, but no one ever mentions that … likely because they were swept out of both Octobers.)

Since the Cubs last played in the NLCS 12 seasons ago, the Cardinals have:

Had one Cy Young Award winner
Chris Carpenter in 2005

None of this changes the outcome of Tuesday’s game, obviously, but at least it can provide a bit of comfort in all that we as Cardinals fans have enjoyed in recent years.

And if it doesn’t, maybe this will … all 6-plus minutes of it.

Yesterday morning I saw a headline somewhere that said Albert Pujols had hit home run No. 496 in the Angels loss to the A’s Monday night.

I’ll admit it — I had no idea he was that close to his 500th homer. I’ll further admit to not really paying attention to how he’s doing this season, except for occasionally seeing tweets from someone who still does a “Pujols Watch” regularly.

This afternoon, I saw a link to an article in USA Today with the headline “As Albert Pujols nears 500 HRs, does anyone even care?” The point made by Bob Nightengale was more that steroids have tainted what used to be a sacred milestone, despite the fact only 25 players in MLB history have reached that total.

Those were the days …

And while that point is certainly valid, as I was reading I wondered if Albert approaching homer 500 would be a much bigger deal if he was still a Cardinal.

Which is pretty much what I then read Fred McGriff say in the article too:

“I think we all thought Albert had a chance to hit 700 homers after seeing what he did in St. Louis,” says McGriff, “but it’s been tough for him out in L.A. Maybe that’s why he’s not getting the attention.

“I’m sure if he was still in St. Louis, they’d be blowing it up pretty good out there.”

Albert hit 455 home runs with the Cardinals, yet — due to injury last year and his struggles during his first season in Anaheim (Los Angeles of Anaheim?) — he’s only hit 51 so far as an Angel. He’s hit four in 14 games this season, which of course is the same number as Jhonny Peralta has hit and one behind his teammate Mike Trout. END_OF_DOCUMENT_TOKEN_TO_BE_REPLACED

With the 2014 regular season just four (Yadi!) days away, this will be the final Cardinals Throwback Thursday post for a while. What better way to make an impact than with a career highlight from the blog’s namesake — the only walk-off homer of his career, which just happened to be a grand slam? 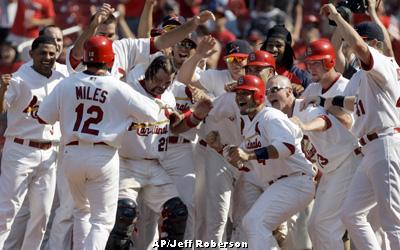 It was a Sunday afternoon just after the All-Star break, the conclusion of a four-game series against the San Diego Padres. The Cardinals had taken the first three games, plus won their final game before the All-Star break, so they had a nice streak going. According to Matthew Leach’s article at Cardinals.com, it was “a definitively miserable St. Louis summer day.”

END_OF_DOCUMENT_TOKEN_TO_BE_REPLACED

The Cardinals are good — this we know. But just in case we’d somehow forgotten, the fact they have eight players on MLB Network’s 2014 list of Top 100 Right Now is definitely a reminder. 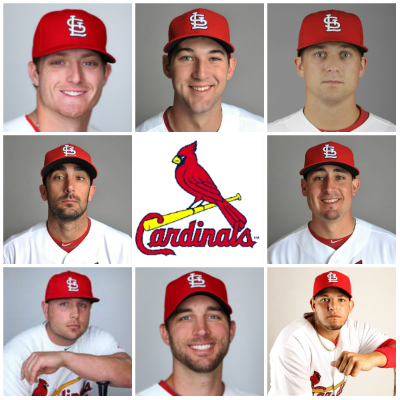 The criteria MLB Network uses for determining the rankings are a player’s stats for the last three seasons, with 2013 weighted more heavily; projected performance in the 2014 season; the defensive position played; accolades earned by the player; and intangibles.

There was a youth movement on the overall MLB list, as 21 of the 100 total are age 25 or younger. Four of the eight Cardinals fit into that category too.

It’s probably no surprise who those four are either. Three are pitchers, and they appeared in a row at the start of the countdown from 100 to the top spot: 23-year-old Shelby Miller at No. 93, 22-year-old Michael Wacha at No.92 and 23-year-old Trevor Rosenthal at No. 91. (Just FYI, Pirate Gerrit Cole was right before them at No. 94.) Impressive debuts on the Top 100 for all three, especially Wacha. Would postseason performance be one of the intangibles?

END_OF_DOCUMENT_TOKEN_TO_BE_REPLACED

In case you haven’t heard, Mark Mulder could be joining That Guy Who Used to Play First Base and David Freese in Anaheim this season. Mulder signed a minor league contract with the Angels as he attempts to return to the majors.

Now, chances are when you think of Mark Mulder’s career with the Cardinals, you’re some combination of disappointed or angry since Walt Jocketty traded Danny Haren, Kiko Calero and Daric Barton to obtain him on Dec. 18, 2004. Mulder’s four-year career as a Cardinal only included 55 appearances due to shoulder injuries that forced him into retirement after the 2008 season. And you don’t even want to look up the numbers for his very limited 2007 and 2008 seasons — some things are best left in the past.

Roger Clemens started for the Astros and lasted seven obviously scoreless innings. The winning run scored when Larry Walker drove in Reggie Sanders, who’d singled to start the inning and advanced to second on a groundout by (who else but) David Eckstein.

END_OF_DOCUMENT_TOKEN_TO_BE_REPLACED

When you think back to the 2006 NLCS between the Cardinals and the Mets, chances are you recall Game Seven. Which makes sense, as it was a tremendous and intense game — to stroll down memory lane: the Mets took a 1-0 first inning lead, the Cardinals tied it in the second, the score remained 1-1 until the ninth inning although the Cards would have taken the lead if not for Endy Chavez catching Scott Rolen’s homer. The ninth inning was epic just in itself as Yadi homered after Rolen singled to definitely put the Cards on top 3-1, then rookie closer Adam Wainwright gave up two singles and a two-out walk to load the bases before Carlos Beltran stepped to the plate and Waiwright threw just three more pitches …

Game Seven’s majesty wouldn’t have happened, however, without So Taguchi’s heroics six days earlier in Game Two at Shea Stadium.

After winning Game One, the Mets took a 3-0 first inning lead thanks to a rough night from Chris Carpenter — he gave up five earned runs and walked four in five innings pitched. The Mets led 6-4 in the seventh inning and David Eckstein and Chris Duncan quickly grounded out and flied out to start the inning. That Guy Who Used to Play First Base then singled and Jim Edmonds walked, bringing up Scott Spiezio and his little red facial hair thing — starting at third base for the game instead of Scott Rolen. The Speez launched it very deep to right, off the top of the wall, and ended up at third with a game-tying triple.

The game remained tied 6-6 until Taguchi, who entered the game as a defensive replacement for Duncan in the eighth, stepped to the plate. He was facing Mets closer Billy Wagner, who had 40 saves during the 2006 regular season. And Taguchi had two homers during 2006 (although he hit one in Game Three of the 2006 NLDS, his only at-bat of that postseason thus far). The count went full. And then …

END_OF_DOCUMENT_TOKEN_TO_BE_REPLACED

Continuing our stroll back in recent Cardinals history from last Thursday, the 2005 St. Louis Cardinals followed up their 105-win-National-League-pennant-winning season by winning 100 games, the NL Central and making it to Game Six of the NLCS against the Houston Astros.

There were new faces: Mark Grudzielanek at second, David Eckstein at shortstop, Abraham Nunez at third, Mark Mulder on the mound. (Speaking of the latter, did you see he’s making a comeback attempt?)

It was the year the Yankees came to town, and Mariano Rivera and his bullpen pals had some fun. It also was the final year of Busch Stadium II.

And it was the year of a couple of very cool August walk-off wins.

END_OF_DOCUMENT_TOKEN_TO_BE_REPLACED

Hello, Anaheim! Disneyland, the Mighty Ducks, the Rally Monkey … oh, and That Guy Who Used to Play First Base.

Yes, the time is finally here — the Cardinals are facing Albert. A series preview is below, straight from the latest edition of The Bird’s Eye View e-newsletter published by the United Cardinal Bloggers (with this one written by me). If you don’t yet subscribe to The Bird’s Eye View, click here — it’s quick and simple and you can stay well informed!

So, the Cardinals are visiting the Angels for the first time ever – though obviously that’s not the real story of this series. No, of course, it’s the Cardinals facing That Guy Who Used to Play First Base, Albert Pujols, for the first time. Much already has been written, much already has been said, much more will be written over these next couple days, much more will be said both during the game broadcasts and elsewhere – you don’t need anything more right here. You already have your own thoughts.

How We Got Here
The Cardinals look for a better month ahead in July than June, when they went 14-14. They’ve lost six of their last eight games and have gone 2-3 on the current three-city road trip. Tonight officially begins the second half of the season for the Cardinals as they play game number 82. They’re 49-32 thus far and in second place in the National League Central, two games behind the Pittsburgh Pirates. They have the second-best record in the majors.