If you frequent Twitter and were checking it Saturday night, perhaps you saw the Cubs’ reply to the Royals’ tweet about the outcome of that evening’s (unfortunately) rain-shortened game. 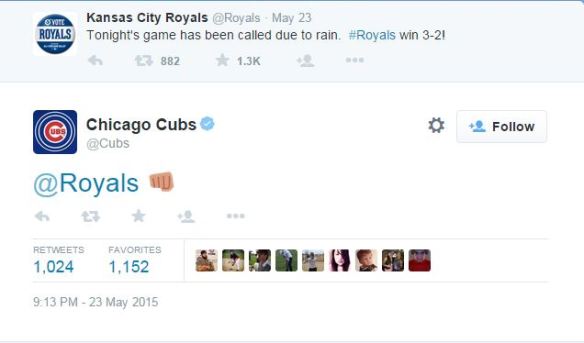 Clever, right? Ha ha, the Cardinals lost, thanks for the huge favor of putting the Cubs one game closer when May isn’t even over yet, Royals! Fist bumps all around!

Sure, it’s great that the person now handling the Cubs Twitter account has a sense of humor and is engaging and interacting with fans. And, sure, it’s certainly Twitter friendly to play up the long-time Cards-Cubs rivalry — look at the number of retweets and favorites of that for proof. Yes, the Cardinals Twitter account certainly could step up the creativity and the interaction … and maybe even take over the “#WeAreGood” hashtag the Cubs account (and Cubs’ fans) love so much.

But have you paid attention to what the Cubs have done since beating the Diamondbacks on Saturday night, after the Royals beat the Cardinals?

On Sunday they lost to the Diamondbacks 4-3, which resulted in them losing the series as well — Arizona won in 13 innings Friday night.