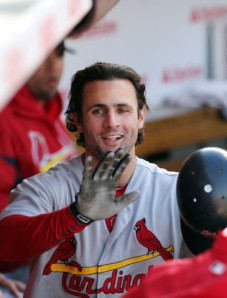 You can count the three of us in the ever-growing Pete Kozma Fan Club. Because after what he did in September, how could any Cardinals fan not be on board?

In September for the Cardinals? Only .349/.386/.619 with two homers and 14 RBI. In the three games against the Nationals over the weekend, he was 7 for 11 with two doubles and six RBI — one Friday, two Saturday and three yesterday plus he was 3 for 3 yesterday in the Cardinals 10-4 win.

Pete’s month was also more than enough to earn him our September BAMF award. Because how could we not give it to him?

Yes, of course, Chris Carpenter deserves an award too — but he’s already been crowned the king of all BAMFs for what he’s done to get back to pitching this season. He’s beyond a mere monthly award.

And there were other Cardinals with great Septembers also — but Allen Craig hitting .316 for the month with two homers and 20 RBI is just Allen being Allen. Jason Motte did have a hell of a month with nine saves (which included becoming only the fourth Cards closer ever to have 40 saves in a season) and the rare reliever honor of being National League Player of the Week. Definitely impressive, obviously BAMF-y and worthy of praise.

But we’re still going with Pete — hey, he’s made great defensive plays at shortstop too — and hoping this Koz Magic continues during these next three games now that October has arrived and the Reds come to town for the final regular season games.

And, most importantly, the production.

4 thoughts on “Yes, Pete Kozma Is A BAMF”