… and what do we know? In a nutshell, Furcal’s still hurt, Waino’s still good, the youngins have potential, and spring ball still doesn’t mean much.

It’s funny how desperately we yearn for this time of year. The fact that baseball is being played makes us all feel like the world is back in order. But, then things play out to one extreme or the other, and the desire to know how the season will end lends itself to over (or, in some cases, under) reacting. 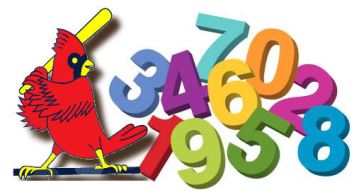 And that’s okay. It’s just how we, as passionate baseball fans, attempt to process the emotion attached to it all.

The reality, though, is that we can tell some things from these early games. Not what October might look like, necessarily, but we can see the beginnings of promise. Or, at least we can tell ourselves that’s what we’re seeing a whole four games in!

Just for fun, though, let’s look at those first four spring games by the numbers.

0 – the number of hits for off-season pick-up Ty Wigginton in seven at-bats. To be fair, Carlos Beltran doesn’t have a hit yet eithe. By contrast, Kolten Wong is 2-for-6, Oscar Taveras is 4-for-11, Matt Adams is 3-for-5 with a home run … even Daniel Descalso and Pete Kozma have homers already this spring! For the regulars, David Freese and Yadier Molina have looked strong out of the gate.

2 – the number of innings pitched for most Cardinals pitchers. And, you know, it’s been more of a success than you’d believe, based on what the internet has said. Sure, Trevor Rosenthal had a rough go of it in the opening game, giving up four earned runs on five hits and two walks. But, Michael Wacha, Seth Maness, Adam Wainwright, and Jaime Garcia (to name a few) all threw scoreless outings. In fact, as a team, the Cards have an early 3.09 ERA, placing them 3rd in the Major Leagues. That’s a little bit of “future” mixed with a little bit of “today,” and plenty of “good” to go around!

12 – the number of earned runs the Cardinals staff has surrendered. Just to compare, that’s 27th in baseball, meaning there are only three teams who have fared better in the early going. Not too shabby.

46 – the number of times the Cardinals were batting with a runner in scoring position. They came through 18 times. That sounds pretty depressing, but keep in mind that number was 2-for-12 after two games. The second two games saw that number become 16-for-32. Improvement is good.

50 – because, Adam Wainwright. Sign him already, will you, Mo? Please and thank you.

102 – the number of ground balls Matt Carpenter has taken at second base. Okay, I totally made that up. But I didn’t make this up: he’s spent 16 innings manning second in the first week, and hasn’t made an error. Good sign? It’s early, but I’ll take it. He’s also 3-for-8 with a double and three walks.

Ultimately, it’s four games. You can’t tell much of anything from four games. Not when you’re seeing guys out of position, for two innings at a time, and early in the spring. But … it’s fun to look at, anyway, because then it feels like real baseball!

So, take the numbers with a grain of salt. Don’t get too wrapped up in early season victories or defeats. And let’s see how this 2013 squad develops, shall we?