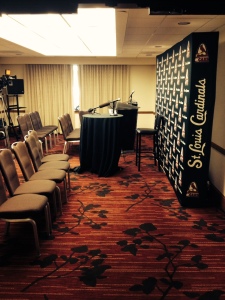 The final day saw a much more calming presence at the 2014 Winter Warmup.  The frenzy was dialed down but the passion was there.  Players like Peter Bourjos, Sam Freeman, Michael Wacha and Mike Matheny spent time with the media while fans flocked to them for signatures, small moments and a picture or two.

Part of my job here is separating the fan side of my personality from the professional side and being contingent on getting enough quotes from them for a good story and catching a glimpse into the way their minds work.  The balance isn’t always easy and one time I was totally swept up in fan zone mania with….Seth Maness.  After his session I asked him about his ability to quickly induce double play balls making the other bullpen guys jealous.  He may have been on the verge of telling me a huge secret when suddenly I wouldn’t shut up.   My rookie status stays quiet for only so long.

Here are some images, bits of info, quotes and other things from Day 3 of the Winter Warmup.

Sam Freeman expects to come into camp ready to compete for a spot in the bullpen.  “Executing pitches one pitch at a time and letting everything fall into place.   Control everything I have control over and keep it as simple as possible.  The competition is something Freeman hasn’t thought about.  “Go out there and perform to the best of my abilities.”  Freeman does have things he wants to improve on.  “Putting batters away.  There were times where I had two strikes and let the batter back into the count.”  When asked if he lets the situation of moving between Memphis and St. Louis creep into his pitching, Freeman simply said no.  “I just let it fly man.  Every time.” 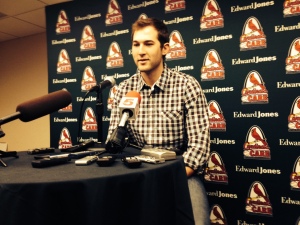 Wacha is a confident kid and he gives that aura off every time he speaks, even though he appears very humble.  Has he sat back and surveyed the world wind experience? “Yes. It was a heck of a run and gets me itching for it to get going again.”  In his mind, the goal is to go out and be perfect, not giving up any hits or runs.  Does he feel the pressure to top last year? “I wouldn’t say that.  I can’t pay much attention to that.  I have my own expectations for myself.  The main goal is try not to do too much. Same mentality going into this year.”

When asked what pitching in the playoffs was like, Wacha said it was different.  “Definitely need the mindset.  A lot of people would fall under the pressure or think the stage is too big for them.  I got lucky with having Waino and Carp there.  Telling me on how to handle it and going into this starts with a good mindset.”

Mike Matheny doesn’t really withhold or pull any punches in his media sessions and gave the room more than enough to make a story.   At the Baseball Writers Dinner last night, Matheny’s hiring as manager was called the best move ever made by the DeWitt’s from Tony La Russa.  The irony is, like La Russa, Matheny doesn’t like getting too much credit.  He puts a lot of it on his players.   He did promise a strong competition all around the roster this spring and can’t wait.  “How can you not be?  We opened people’s eyes with the names at the end of the season.  We have to build a club.  Everybody buying into the concept that this is a group and not just one person.”

Matheny liked the instant replay ruling, saying it will help the game.  “Is there a perfect system? No.  Is this a step in the right direction?  Yes.  You have to start somewhere.  To not use a technology everybody else in the stadium can use is a mistake.”  The one thing I appreciate about the skipper is his bluntness with the media and that lasts through an entire season.  If he doesn’t give writers the answers to make the juice drip from their everyday prose, he does give them succinct answers.  I can appreciate that and in his third year on the job coming up, reflects fondly on being glad the moment he was hired.

108 Stitches is a t-shirt company that worked closely with Jason Motte in his “K Cancer” Foundation.   His shirts with a backwards K have gone worldwide and the t-shirt company is helping get that done.   A poster of the Cards players wearing the shirt as well as other player shirts will available this weekend.  A portion of the proceeds go to Motte’s foundation so while you are getting a super soft comfy t-shirt you are also helping fight a deadly and simply tragic disease.  You can find all of the products right here on the company’s website, www.108stitches.com. 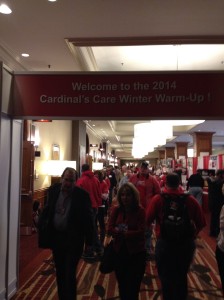 That’s all for now.  I will have more on the other sights from this event and a feature on Tony La Russa later this week.  Thanks for reading my coverage and I can only hope I brought you with me through my writing.  Follow me at @buffa82 on Twitter for minute to minute thoughts and perspective.