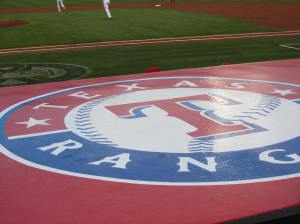 The wonderful ladies of Aaron Miles’ Fastball have asked me to introduce you to your opponent for the next 4 to 7 games, the Texas Rangers. Although, I could go on and on about this team, I’ll just hit on the key items (for more ramblings from me, check out my Rangers Bandwagon post from earlier this month).

Ian Kinsler, 2B: Ladies (and some gents), tall socks, crazy curly hair, dimples?  Yeah, it’s hard not to love his adorableness.  Oh, and he’s not to shabby at that baseball thing.

Elvis Andrus, SS: My personal favorite on the squad. He’s young and still plays the game like he can’t believe he gets paid to play baseball.

Josh Hamilton, CF/LF: One of the best stories in baseball.  Known to make a spectacular catch or two.

Michael Young, 1B/DH: The face of the franchise.  Some pre-season trade demands/threats caused a bit of a ruckus, but all was forgotten after his best season to date.  However, it did not make me forget this little boy’s reaction to finding out his “team” might get traded.

Adrian Beltre, 3B: Acquired in the offseason.  Pretty badass at 3B.

Mike Napoli, C/1B/DH: Traded to the Rangers from the rival Angels.  Averages a home run every 12.3 at bats.

Some mix of Craig Gentry/Mitch Moreland/Endy Chavez/Yorvit Torrealba (there’s a whole lot of scrappy among this bunch).

CJ Wilson: The media darling.  You’ll see lots of interviews with the team ace.  You can also follow his thoughts on Twitter (@str8edgeracer).

Colby Lewis:  Our 2010 Postseason ace.  Average during the regular season, but became a force in the Playoffs.  Will give up the occasional solo home run.

Derek Holland:   You’ll notice a growth under Derek’s nose.  Not to fear, it’s just a “dutch-stache”.  You can also find Derek on Twitter (@Dutch_Oven45).  Warning: There are some lame Chuck Norris jokes there.

Ron Washington: I know as Cardinals fans you are used to Tony LaRussa.  TLR is intense, if not sorta scary.  Aside – I once saw TLR in a mall in Houston. I wanted an autograph, but was too terrified to approach him.  Wash, on the otherhand?  Well, you never know what he’s going to say.  From “that’s the way baseball go” to calling Mike Napoli a dirtbag endearingly, he’s full of awesome one-liners.  He’s also been known to dance a little in the dugout and show emotion – something TLR rarely does.   Want good reality TV?  Let’s get these two managers to live together.  It would be a modern-day Odd Couple.

Claw – The hand motion where a Ranger on base will “high five” the bench.  PLEASE DO NOT CONFUSE THIS WITH BEASTMODE BECAUSE IT’S NOT OBNOXIOUS.  (The Rangers are actually pretty subtle about this.)

Antlers – A Ranger does the antlers when there is a good hustle play.

We were in this very position last year, and well, just making it to the World Series just isn’t enough.  Losing last year to the San Francisco Giants has these boys wanting more.  I expect them to come out swinging.

What We Have In Common:

We can all thank the Atlanta Braves for our World Series appearance.  The Cardinals were assisted by their September collapse; The Rangers by the Mark Teixeria trade in 2007 – netting the Rangers Elvis Andrus, Neftali Feliz, and Matt Harrison.

Personally, I think this should be a great series.  The two teams are pretty evenly matched.  And oddly, similar postseason story lines (minus that whole coming back from 10.5 games back thing) – great offense, few innings from the starters, stellar bullpen.