There is a bright side about yesterday’s Game Five loss. Now the Cardinals can win tomorrow night, at home, in front of the Busch Stadium fans and enjoy.

At least that’s what I’ve been trying to tell myself. 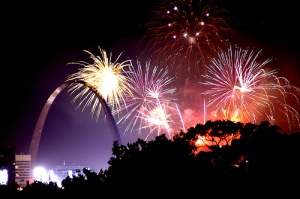 e while regular season losses are bad and October losses are even worse, NLCS losses when a win would clinch the pennant are awful. Horrible. Dreadful. And any other similar word you can think of.

Because, as you might remember and have heard over and over (and will continue to hear over and over from the sports media until the team wins tomorrow night), we’ve been in this situation before — up a particular number of games (I don’t even want to go into it) and then, um, not winning again.

Yesterday’s 6-4 loss to the Dodgers was painful, although the Cards absolutely showed some encouraging, play-a-hard-nine, never-give-up spark in the ninth inning. Which was awesome — until Adron Chambers stepped in to pinch hit.

Nothing against him personally, obviously, but that was just one of the questionable moves made by Mike Matheny yesterday, along with why stick with Joe Kelly for so long? Why Edward Mujica? Do you remember there’s a kid named Shelby Miller on the team? And, beyond that was the lack of real production by the offense until the ninth inning, especially in the first inning with the bases loaded …

Ugh. I don’t want to think any more about it.

You likely don’t either.

So let’s just take consolation in the fact Friday nights at Busch Stadium have proven to be good times for celebrations. Now let’s add a pennant clincher at home to that list.

Michael Wacha makes the start for the Cards, against Clayton Kershaw — yes, you’ve heard all about this before too. Game time is 7:30 p.m.

IN WACHA WE TRUST!

Although a little offense would be really nice too, like they had on this day …