One week, just one more week! Yes, next Sunday night is the official start of the 2015 MLB season when the Cardinals take on the Cubs at Wrigley Field. Regardless of the Chicago forecast, which shows a high of 51 next Sunday so it will be even cooler at game time, real baseball will finally begin.

Yes, just 7 days. And while there are plenty of notable 7s in Cardinal history — the current one in Matt Holliday, of course, as well as Joe Medwick of the Gas House Gang and J.D. Drew, who Daniel wrote about at Cards Conclave today — my choice is someone who wore No. 7 for a short period of time, Ronnie Belliard. 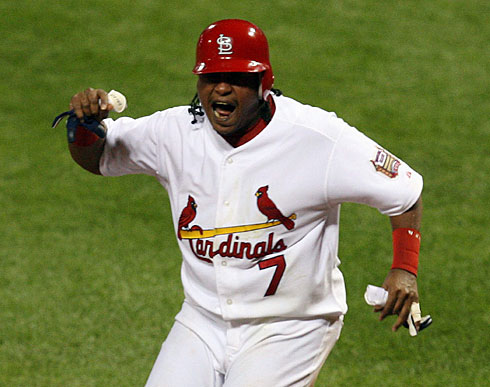 Belliard was acquired by the Cardinals on July 30, 2006, for the man who had been wearing No. 7 that season and the year before, Hector Luna. Belliard only played 54 regular season games and 14 of the 15 postseason games (sitting out Game Two of the World Series), yet I’ll bet every one of you can remember one specific play he made in Game One of the National League Division Series against the Padres.

As we also recall, the Cards slumped their way into October 2006 after going 13-15 in August, 12-16 in September losing the regular season finale on Oct. 1 yet clinching the NL Central on that final day when the Astros also lost.

Game One of the NLDS featured Chris Carpenter against Jake Peavy, and the Cards scored 5 off of Peavy through 5 1/3 innings. Carpenter didn’t allow a run until the bottom of the sixth, giving up a sacrifice fly to Brian Giles after Dave Roberts tripled.

The score remained 5-1 in the bottom of the next inning when CC returned to the mound. He only lasted three batters, giving up a triple (ouch, Jim Edmonds) and walk after getting Mike Piazza to ground out. (Am I the only one who forgot he was on the Padres that year?) Tyler Johnson came in and promptly hit Josh Bard with the first pitch to load the bases with the one out. From there …

Well, rather than describe it, you can watch it — and Belliard’s incredible contribution — instead with this video of the bottom of the seventh inning. (Thanks, Michael!) Yes, it’s Chris Berman on the ESPN call but he wasn’t as bad as I was anticipating when I heard his voice. And Orel Hershiser makes up for it.

Seriously, how did Belliard get to that?

His teammates appreciated the play too, as Rich Draper described for MLB.com:

“In the clubhouse, the fellows gave Belliard the game ball for that play,” said Cardinals manager Tony La Russa.

Center fielder Jim Edmonds, who singled twice, scored a run and played well defensively, spoke for all the Cards after the game about the importance of Belliard’s scramble and throw.

“Ronnie’s play was the play of the year,” said Edmonds. “That saved the game for us. If that’s a two-run single right there, we’re in trouble. We made a little special effort to let Ronnie know how much we appreciated that.”

Yet he also had a tremendous series with his bat:

Belliard finished the NLDS with a team-leading six hits in four games and a .462 average, two runs, two game-tying RBI in Game 4, a stolen base and one game ball.

“There is no question that’s the Ronnie Belliard that everybody knows — defensively and offensively,” Cardinals ace Chris Carpenter said during the team’s celebration after the National League Division Series win against the San Diego Padres. “He had a phenomenal series. Having him in there, making some of the plays he’s made and coming up with some of the hits he came up with, that’s the guy we need to help us win.”

And winning that NLDS was obviously just step one of the playoff run that October, thanks to No. 7. He was a free agent once the season ended, and signed with the Nationals. Yet his own play helped Ronnie Belliard and his teammates become World Series champs.