Just hearing the two words “Game 6” bring back the memories of the greatest game in St. Louis Cardinals history and, arguably, the best World Series game ever. And it happened five years ago tonight, Oct. 27, 2011.

How to commemorate the milestone of this event, when so much has been said and written already throughout the five years here and elsewhere? In pictures that let you relive the experience for yourself and remember how the game unfolded, as it truly spanned the gamut of baseball emotions.

If you do feel like reading more, Jayson Stark’s piece at ESPN from the time remains the classic account — and includes this from Lance Berkman:

“Really and truly, this was an ugly game for about six or seven innings,” said the relentlessly honest Berkman. “But then it got beautiful, right at the end.”

For a more retrospective look, this piece by Anna McDonald at ESPN from earlier this month looks at both the Rangers and Cardinals recollections from Games 6 and 7.

And now, a look back to the entirety of the game, and not just the iconic moments that are still so vivid today. 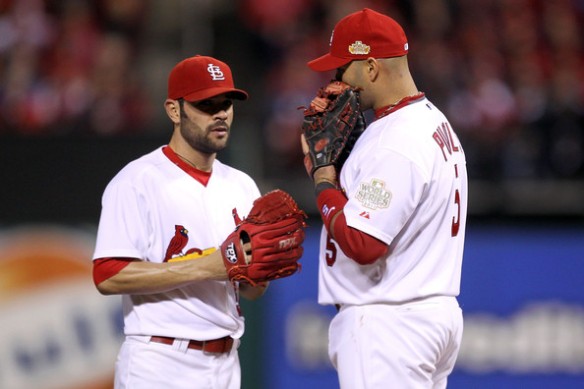 Jaime Garcia was the starter for the Cardinals in Game 6, and his first inning was rather rough: a walk and two singles that put the Rangers up 1-0 before he even got the first out. 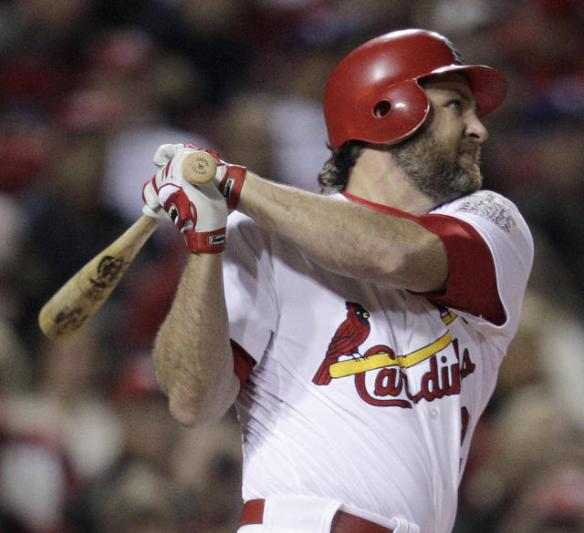 In the bottom of the first, with two outs and Skip Schumaker on first after he singled, Lance Berkman homered to make it 2-1 Cardinals. He was 3 for 5 on the night, with those two first inning RBI and another rather important RBI later on …

Garcia was shaky in the second inning as well, as a walk and two hits allowed the Rangers to tie the game at 2.  END_OF_DOCUMENT_TOKEN_TO_BE_REPLACED

Like many of you, I watched yesterday’s NFC championship game between the Green Bay Packers and Seattle Seahawks. 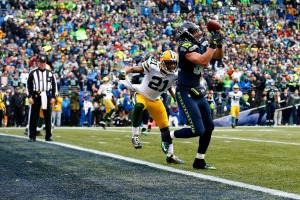 Unlike most of you, I am the rare combination of St. Louis Cardinals fan for baseball and Chicago Bears fan for football. Which means I wasn’t rooting for the Packers — I know there are quite a few Cardinals/Packers fans (I am related to several) who obviously were rooting for their team, and the Cardinals/Rams fans were for the Packers also rather than see a division rival win.

So, personally, I was ecstatic over the outcome. More than ecstatic, actually, to see the Packers implode that way.

But I definitely disagree with Bob Nightengale. 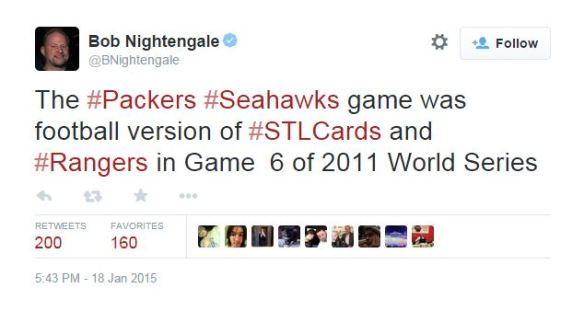 Sure, I get it — sloppy game to start with, as we remember the ball that bounced off David Freese or the one that neither Matt Holliday nor Rafael Furcal could come up with in Game 6. Yes, comparisons can be made with the four interceptions that Russell Wilson threw yesterday.

The comeback that Wilson led, with the Seahawks scoring 15 points late in the fourth quarter was definitely amazing. Incredible plays, like Seattle recovering the onside kick after Wilson scored a touchdown with just over two minutes left. Then the two-point conversion pictured above. We even had the moment similar to Josh Hamilton’s Game 6 10th inning homer — kind of — in Mason Crosby’s game-tying field goal with just 14 seconds left to send the game to overtime.

And there’s the biggest difference: time.  Or, rather, no time. END_OF_DOCUMENT_TOKEN_TO_BE_REPLACED

As yesterday’s game went into extra innings (and perhaps the less said about the game, the better — another frustrating loss in a season filled with them), the thoughts of Cardinals fans turned to walk-off wins. The 2014 Cardinals have had two so far, both within the past two weeks and both decided in odd ways: the walk-off hit-by-pitch against the Cubs on May 13 and last week’s walk-off throwing error by the Diamondbacks in extra innings.

In the end, wins are wins and however they are achieved works. But when was the last time we experienced the joy and thrill of a walk-off home run, that unbelievable feeling like in Game Six of the 2011 World Series?

Of course, hitting a walk-off homer requires actually hitting a homer — something the 2014 Cardinals are definitely not doing very often. They have 26 home runs as a team this season, which is last in the National League. It will take a bit to catch up with the 14th place team too, as the Mets have 34. Overall in MLB, the Cards rank 29th — the Royals trail then with only 20 homers. (Fun fact: the major’s current home run leader, Nelson Cruz, has 16.) END_OF_DOCUMENT_TOKEN_TO_BE_REPLACED

Baseball is so much about history, which we as St. Louis Cardinals fans especially know. There are so many classic games the Cardinals have been involved in through the decades, and even (or especially) recently. 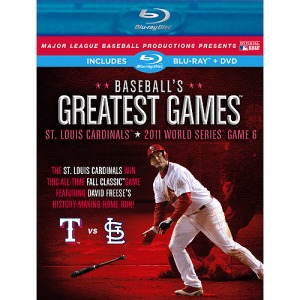 To celebrate some of the greatest moments in overall MLB history being available for digital download on iTunes, you have the chance to win the most memorable Cardinals game in recent years on DVD/Bluray combo: Game Six of the 2011 World Series.

It’s part of A&E Home Video’s “Baseball’s Greatest Games” series, and it couldn’t be easier to enter our drawing to win one of three DVDs.

One of the Cardinals from that game who played a significant role in the victory was just honored last weekend on his retirement from MLB by his previous team. Who is that former Cardinal? (Hint, hint — although I doubt you need one.)

Enter by this Tuesday, April 15, at 7 p.m. Central Time (just before the Cardinals-Brewers game). A random drawing for the winners will be held.

And also through April 15, you can take advantage of the digital download sale at iTunes. END_OF_DOCUMENT_TOKEN_TO_BE_REPLACED

It was the most common answer in Tuesday’s question of “If You Could Attend Any Game in Cardinals History, What Would It Be?” and with great reason. Game Six of the 2011 World Series is one of the best games in baseball history. (Maybe the best.) We’ll never forget David Freese’s heroics — both his ninth inning game-tying triple and 11th inning walk-off winner. 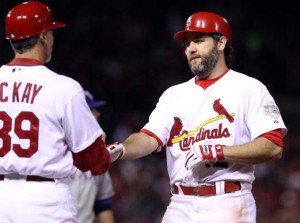 Sometimes overlooked yet just as important: Lance Berkman’s game-tying single in the 10th. And, with Lance announcing his retirement yesterday, it’s the perfect time to recall just how crucial he was to that game (and to revive our LB Fan Club again). Had he made an out during that at-bat, we’d be just as disappointed about the 2011 World Series as we are about 2013.

But of course he didn’t.

Even before that at-bat, though, he’d had a really good night at the plate. In case you’ve forgotten, he had a first inning homer with Skip Schumaker on base to put the Cards on top 2-1. He’d reached on an error, singled and walked before coming up in the 10th with Jon Jay at third and That Guy Who Used to Play First Base on first after being intentionally walked. LB also scored four runs that night, which tied a World Series record — and his fourth run tied the game on Freeser’s triple in the ninth.

END_OF_DOCUMENT_TOKEN_TO_BE_REPLACED

Just those words alone brings back so many memories for us as Cardinals fans — no need for year or Game 6 of what. We just know. 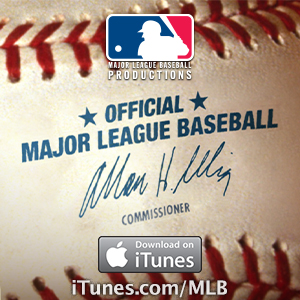 And now five of you will win your very own copy of the DVD/BluRay combo of Game 6 courtesy of A&E so you can relive that incredible game anytime — all as a way to celebrate even more fantastic World Series moments from 1947 on and other classic MLB features that are now available on iTunes.

Details on how you can win in a second …

More than 100 MLB titles are now live on iTunes, which already includes hundreds of classic games as well as podcasts and award-winning mobile apps from MLB Advanced Media such as MLB.com At Bat.

END_OF_DOCUMENT_TOKEN_TO_BE_REPLACED

Bottom of the ninth, down by two, two outs, tying run at the plate … stop me if you’ve heard this before. 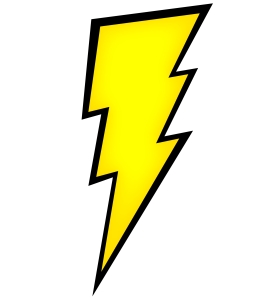 This time, though, there would be no magic in the bottle, no matter how eerily similar the situation became.

Things started out beautifully. Three runs in the first should have been a little breathing room for Tyler Lyons, who was looking to bounce back from a less-than-stellar outing in his previous start. The good vibes, though, didn’t last long. With two outs in the top of the second inning, the bottle of rookie magic ran dry. Lyons gave up three runs on two hits and two walks. He was charged with a fourth run after Joe Kelly scrambled in to relieve him, but gave a base hit that scored an inherited runner.

To state the obvious, going 1 2/3 with four runs on three hits, three walks and a strike out didn’t help his rotation case. In fact, Mike Shannon said something about the midnight train to Memphis.

Good thing Joe Kelly’s still around. (Yes, believe it or not, he is.) He came in and threw five complete innings, giving up five hits and striking out three. Basically, he validated the “long reliever” title by doing exactly what a long reliever should … and then some.